Today’s rare guest entry is brought to you by long-time reader and oft-honored Comment of the Month recipient Brad. He taps into the world that we all float through every day, the world of people we see day after day–maybe at work, maybe in the park, maybe in your apartment building–and yet never really know them beyond their nicknames. 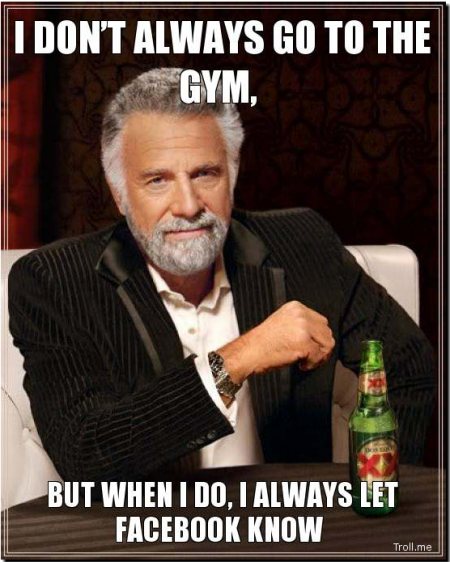 Ever since Ted Danson gathered a lovable group of misfits at his tavern, every successful (and unsuccessful) sitcom has featured The Hangout.  Be it Monk’s, Central Perk, McLaren’s – wherever.  Every modern sitcom has a place where everybody know’s your name, where the protagonists can meet at 2 PM on a weekday, air their thoughts on the problems of the day and chat with the strangely eloquent staff.

My life is no different.  Instead of a bar, however, I have the gym.  And instead of friends, I have Gym People.

Now, anyone who goes to the gym with any regularity knows what I’m talking about.  I don’t know these people.  I don’t lift with these people.  I don’t even talk to them.  For all I know, they are there all day, just waiting for my arrival.  But they are my friends.  In an uncertain world, I know I can count on the Bicep Men to seek attention by grunting loudly.

I know the Really Strong Guys (who are never cut) will be in the corner, standing beside – but never lifting  – a bar they have filled to the edges with 45-pound plates.  I know the Tan Girl will be on the treadmill right beside the door, and I know the Dumpy Guy (who stays dumpy despite working out every day) will do sit ups until he sees the treadmill beside her open up.  But he won’t say anything, despite me sending him happy thoughts.  No one will be happier than me when the Dumpy Guy makes his move.

I enjoy seeing The Guy with the Magnets on his Neck and The Girl in Black.  Popeye and The Professor are always a welcome sight.  The Stretching Girls seem so nice.  I love my Gym Friends.   Except one…

Better Brad is, without a doubt, my greatest nemesis in life.  No matter when I show up, he’s there, with color coordinated clothes and a full head of hair.  He looks like me, but tanner, more muscular and without an oddly flat right side of his face.  He does my workout, but with more weight.  He gets on the bike beside me and pedals faster.  He does leg lifts while I do sit ups.  He claps in between his pushups.  He never sweats.  He is Better Brad.

Around 6 months ago, I went to get a smoothie after working out.  Who pulls up beside my minivan?  Better Brad, in a sports car.  We walk in.  I ordered a medium Angel Food.  Better Brad ordered a large.  It was on that day I decided some way, somehow, I was going to defeat Better Brad.

My first attempt to do so began with me lifting 135 pounds over my head and ended in the hospital.  The second ended with me lying in bed, unable to move after losing a stationary bike race.  So my quest to become Best Brad is on hold.  I need some help.  Maybe the Really Strong Guys can help me.

So, am I crazy?  Does anyone else have friends like these that you don’t actually know?

This entry was posted on Thursday, February 16th, 2012 at 10:25 pm and is filed under guest entry, guy talk, humor and tagged with guy talk, humor. You can follow any responses to this entry through the RSS 2.0 feed.

30 Responses to “The Friends You Don’t Actually Know”

Leave a Reply to Susie