The Joy of Ramen 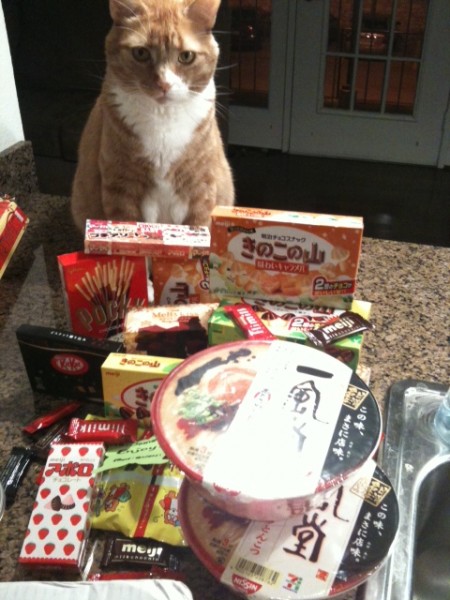 Today I had one of the happiest moments of my life. It involved ramen.

This blog entry could have gone several directions. One was to be a personal entry about how the one type of surprise I like is a chocolate surprise. The other was to be a  pet please entry about care packages, because it was the care package (left) that I received from a Japanese family friend that made my day–maybe my year–today.

But the heart of this entry involves the two ramen bowls you see in the foreground of the photo. Let me give you a little background:

In Japan, there are literally millions of ramen restaurants. I know that in America it’s thought of as cheap noodles that you eat when you can’t afford anything else, but in Japan it’s a delicious soup with tons of varieties. Most ramen places are roughly equivalent of a Chipotle here in in the States–you come in, eat your food, and leave. You don’t make a 2-hour meal out of it.

During my year abroad in Kyoto, several of my American and Japanese friends were really into ramen. The Japanese guys even put together a ramen tour that I never fully understood, but it amounted to eating some interesting ramen (like a bowl that is lit on fire before you eat it) along the way.

My American friends and I had two favorite ramen restaurants: Tonryuu and Ippudou. Tonryuu serves this thick, buttery broth that will make you yearn for a second bowl (a decision your stomach will regret). Ippudou has a milky broth that is augmented with your choice of red or white. We never quite figured out the difference, but our best guess is that red is spicier than white. Like most things in Japan, we just went along with it.

Both of these places were so popular that they had lines out the door every time we went. Every time. But it was worth the wait. 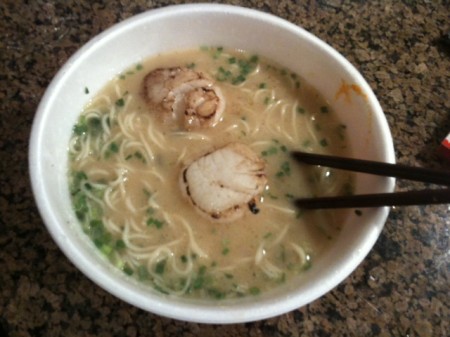 So a few weeks ago I mentioned on Facebook that I had purchased one of my favorite Japanese candies (chocolate crackers in the form of mushrooms called, of course, Chocorooms) on Amazon, and the post incited a discussion about other Japanese treats that I missed. My friend Tomomi (a former exchange student of my family’s) offered to send me a care package, and I asked if she could add a bowl of instant ramen. I mentioned Ippudou in case they sold their instant variety in Tokyo.

And lo and behold, I found two bowls among all the chocolate in the care package. I had just come from the grocery store with giant scallops in hand, so I quickly pan seared them and added them to the ramen. Doesn’t it look delicious?

There was a moment when I was eating the ramen that nearly brought tears to my eyes. It was a moment of pure bliss–not just from the deliciousness of the ramen, but also from the transportive nature of it. Here I was in my condo in St. Louis eating a bowl of ramen that, up until that point, I had only consumed halfway around the world in Kyoto 10 years ago. It was a moment of true connection through space and time.

If you’ve studied or traveled abroad, what food would transport you back to that country and that time if you ate an exact replica of it today?

This entry was posted on Monday, February 6th, 2012 at 10:54 pm and is filed under Japan and tagged with travel. You can follow any responses to this entry through the RSS 2.0 feed.

14 Responses to “The Joy of Ramen”