We’ll start off with John, who wins the Snarky but True Award for pointing out a key flaw in a study that said that people with messy desks are less productive.

Perhaps people don’t work as well with a fMRI strapped to their head. Do you think the study took that into account?

There were a LOT of amazing, insightful, and challenging comments in my entry about my experience in primary and secondary education, but there were two that stood out as my favorites. The first comes from Imposter Josh as he explains that he was both homeschooled and attended high school.

I am fortunate that I had both experiences. While I’m sure that I didn’t learn as much in public high school as I would have if I had stayed homeschooled I believe that I had a strong enough foundation in grammar, math, history etc. that it probably didn’t make a material difference in my eventual “life success”. However, public school offered the opportunities of varsity sports, and competitive debate/forensics which are memories/experiences that I cherish.

The second comes from Penelope, whose child is currently enrolled in a really interesting and progressive elementary school:

I believe that even at A’s level (1st grade). His classroom is made up of 1st, 2nd and 3rd graders. His education is individualized so that spelling, math, reading, etc are neither boring nor too challenging. For him, that means he usually reads at a 3rd – 4th grade level, but is more at the 1st grade level for math.

Each week for his spelling words, his teacher presents him with a list. He goes through and tells her if it is too hard, or too easy. This process is the same for each child – students often go through 3 lists to get to just the right challenge level each week.

Another choice I love is the structure of his day. Some things are set in stone – Spanish, Music, Art, etc. But he receives an individualized card with several works he must complete by day’s end. He can complete them in any order he wants, and if he has questions he can go to his teacher or 3rd grade mentor. I love how this teaches him to take responsibility, manage time and general awareness of what subjects he favors. 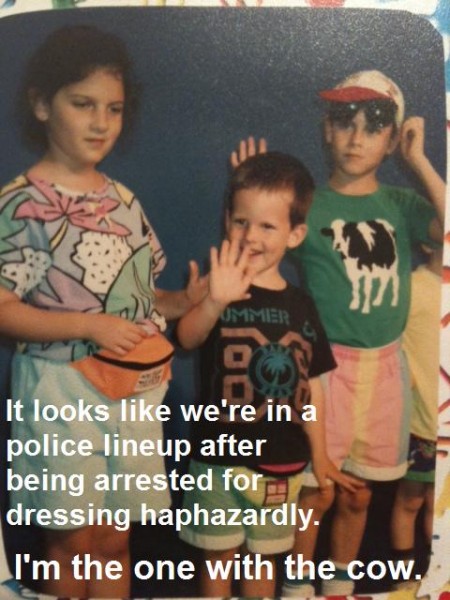 My sister, Emily, had a good line after she saw that I posted a photo of her, my brother, and I on an entry about The Best Day of My Whole Life. I’ll post the photo again here for your viewing pleasure with the original caption:

I think you should have obtained signed releases from Andrew and me before posting that photo.

Anne wins for Best Comment Out of Context on an entry about how I like it when I see people not talking on their cell phone while walking their dog:

And don’t even get me started on people who consider their children a nuisance. When I was pregnant, some douche at my doctor’s office looked at my belly, then looked me in the eye and said, “Enjoy the time you have left. Your life is about to be over.”

IN FRONT OF HIS WIFE AND TWO CHILDREN.

I wanted to punch him in the nuts. Lucky for him, I was 38 weeks pregnant and wouldn’t even have been able to reach his nuts.

In response to me saying that I grew out of making a stupid face in photos in early high school, Trev revealed this juicy tidbit to the world (I swear I had forgotten that I did this! And it’s still better than the kissy face!):

Remember that phase (overlapped with your time in Japan, I believe) in which most of your photos looked like you were peeing hard on something? Feel free to explain this more or to let your readership wonder.

I was really, really moved that my mother, sister, cousin, brother (who never comments), and biological mother commented on my post about adoption. That was one of the few posts I’ve written that I truly hoped that people spread around–not for me, but for anyone touched by adoption–and people answered the call. The post has been “Liked” 165 times, by far the most of any post I’ve written. It’s tough for me to describe why the comments touched me so much–particularly my brother’s and sister’s comments–but I think it was because me being adopted was such a normal thing in our household. The subject rarely came up, not out of avoidance, but because it was such a non-topic. As my brother said in his comment, “I didn’t realize it was unusual or even worth mentioning to have an adopted sibling until I was in middle school.” I am so, so lucky to be a part of my family.

To end on a lighter note, I’ll end with this month’s Comment of the Month from Brad. It’s his response to a tip I give to introverts about how they should stand to feel more confident:

Just this morning, I assumed The Power Pose at McDonald’s and was given my breakfast for free. I then stood in the doorway of St. Jude – doing The Power Pose – and was hired as a pediatric oncologist, despite the fact that my only medical experience is a C in 10th grade chemistry.

You can see last month’s Comments of the Month here.

This entry was posted on Monday, April 30th, 2012 at 10:59 pm and is filed under best of the blog, superlatives and tagged with superlatives. You can follow any responses to this entry through the RSS 2.0 feed.