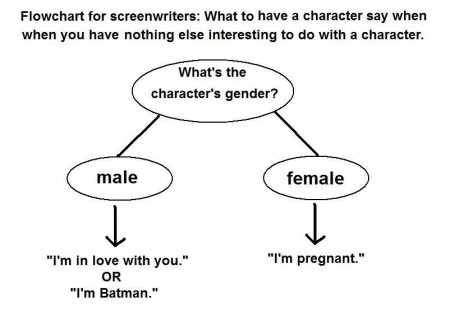 People tell other people they’re pregnant so often on TV and in movies that it’s no longer a surprise. It’s officially a contrivance.

In movies, the revelation that someone is pregnant always happens when something crazy is happening, and the pregnant person isn’t reacting as they normally would, and then they say those fateful words: “I’m pregnant.”

In TV shows, it can happen pretty much at any time, but more often in season finales than regular episodes. Again, it always happens when someone is acting out of character. As a viewer, you’re supposed to wonder why the person is acting so strange. But you don’t even wonder anymore, do you? Because you’ve seen it a million times.

In real life, do people wait until the most dramatic moment possible to reveal that they’re pregnant?

Nine times out of ten it feels like lazy writing. It’s as if the writer has reached the point where they have nothing else interesting to do with a character, so they check their writer flowchart (see inset that I made) and make the character pregnant. I bet these writers think they’re brilliant when they do this. They really break out the champagne at that moment. “Hey guys, I got it! It’s brilliant! She’s pregnant.”

Can we (writers, that is) just agree to not make anyone pregnant for a while? Or at least if your characters absolutely insist upon getting pregnant, can they just tell people in a reasonable, realistic way?

This entry was posted on Tuesday, May 29th, 2012 at 10:12 pm and is filed under movies, television and tagged with contrivance, movies. You can follow any responses to this entry through the RSS 2.0 feed.