I Have Some Regrets

I’m sure you’ve heard people–perhaps including yourself–say, “I have no regrets.”

What’s so wrong with having a few regrets? 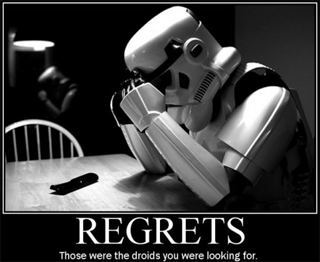 I think we have a lot to learn from our regrets if we’re aware of them. A regret is more than just a passing disappointment or failure–it’s something we return to in our minds from time to time, even years after they happen. Regrets mean something. Why wouldn’t we want to acknowledge them, process them, and learn from them?

Recently I blogged about how I wish a virtual reality machine existed that would let you go back to pivotal (or trivial) moments in your life, make the opposite decision that you made, and relive your life along the other path. I talked about colleges in that blog entry.

One of my biggest regrets–one that I was just thinking about today–happened at the end of my junior year in college.

You see, when I decided to attend the expensive private school that is Washington University in St. Louis, I made an agreement with my parents to work every summer to pay for my room, board, and books (I also had a work-study job during the year). So throughout my year in Japan, I always knew that I’d return to the States in late May to start my summer job.

The summer job was working as a waiter at a restaurant in Chesterfield, Virginia. At the time, I thought I wanted to open a restaurant after college, so the job was not just for money–it was to gain the experience I needed to open my own restaurant.

This ended up being irrelevant, of course, because during that summer I learned how incredibly difficult it is to manage a restaurant, much less own one. I enjoy challenges and hard work, but you’re talking about razor-thin margins, huge amounts of risk, and 12-18 hour days 6-7 days a week.

So, rewind to the pivotal decision I could have made, the one I regret: Near the end of the school year, I was all but offered a scholarship to stay in Japan for the summer to write a mini-thesis of my choosing. It was enough money for rent, food, with some left over. 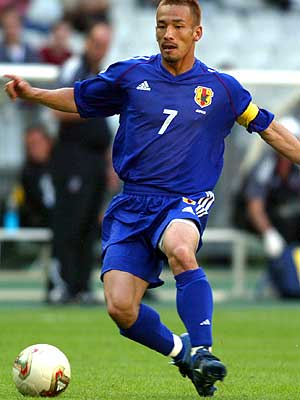 This was the summer of 2002. The summer of the World Cup. The summer that Japan was co-hosting the World Cup with Korea. A summer when hundreds of thousands of people paid huge sums of money to get to Japan, stay in hotel rooms, and watch the world’s best soccer teams clash. I would have had my own apartment in the middle of all the craziness.

And yet I chose to go back to the US to work at a seafood restaurant.

10 years later, the choice still baffles me. I was nearly fluent by then and had a really great group of Japanese friends who were just as baffled as I was when I told them that I wasn’t staying for the year, but rather the academic year. There was even a really cute girl who I had been flirting with for ages as I waited for her to stop chain-smoking so I could make out with her.

And yet I packed my bags and flew home.

I think part of it was the money I had committed to make that summer. Part of it is that I had always thought of myself as leaving Japan in late May, and I couldn’t reset the plan in my mind. Part of it may have been that I was a little Japaned-out after studying it for 9 years; I particularly missed 100% natural English conversation after that year in Japan. And maybe part of it was that I liked the structure of going to class in Japan, and I was somewhat at a lost without that structure.

Who knows, maybe if I had stayed, I would blindly continued to have the dream of opening a restaurant after college, and I would have had quite the rude awakening when I tried it. Maybe I would have been swept away in the throngs of international soccer fans. Maybe I would have ended up on a Japanese game show that involved me exchanging fingers for clues to a Hello Kitty-themed puzzle.

But whatever would have happened didn’t happen. I went home, and I regret it.

And there’s nothing wrong with that. Some things are meant to be regretted. It’s my job to acknowledge the regret and learn from it. I need to be able to recognize similar situations when I leave too early for the wrong reasons–whether it’s money or flexibility or uncertainty or fear.

I need to recognize the best years or months or days of my life as they’re happening and do everything possible to prevent the sun from rising.

Has this entry triggered anything in you? What’s your stance on regrets? Have you ever cut off an amazing experience for baffling reasons, and you wish you could go back and continue the journey?

This entry was posted on Thursday, June 14th, 2012 at 12:33 am and is filed under Japan, life lessons, personal and tagged with personal. You can follow any responses to this entry through the RSS 2.0 feed.

11 Responses to “I Have Some Regrets”