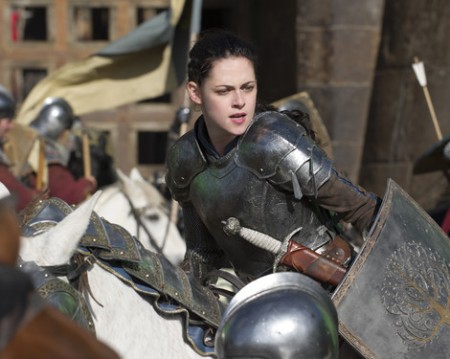 I have two major qualms about sword fights in movies.

The first comes to you thanks to a delightful little film called Snow White and the Huntsman. My two-word review of this movie is: “Good try.” It’s the type of movie that has some solid aspects on the surface, but in the long run it will serve as fodder for many a late-night ad-lib.

One element of the movie that I found amusing is Kristen Stewart’s ability to wield a sword and shield with ease. Stewart can’t weigh much more than 100 pounds, and I have difficulty believing that she could lift a Big Gulp, much less a broadsword. And yet she charges into battle (her first battle, by the way, after being locked in a tower for most of her first 18 or so years) twirling a sword as if it’s a toothpick.

This qualm isn’t just about Snow White and the Huntsman–rather, it’s about any movie that involves sword fighting. You see, swords are very, very heavy. I had the pleasure of trying to lift one when I met author Brian Jacques when I was in middle school.

In medieval-period movies, people wield swords with ease, but those are prop swords, not real metal swords. Most broadswords take two hands to swing, and although a strong person could fight with a smaller sword with one hand, there’s none of this twirling the sword with a flick of the wrist like you see in Lord of the Rings. You’d sprain your wrist trying that and then would immediately be killed by a dwarf-hobbit hybrid.

What are they aiming for?!

The second qualm is in regards to the insistence of swordfighters in movies to try to cut their opponents sword in half instead of the opponent themselves. The next time you watch a movie with sword fighting, watch how often the two people aim for each others’ swords even when they have a clear shot for the body.

I’m not trying to glorify violence, and I understand that staged sword fights are probably more entertaining than actual sword fights, but I think the audience can see through these staged dances. They look like actors swinging swords instead of real sword fighters, which removes the stakes from the scene–if they’re not actually trying to hurt each other, why are they fighting? Why doesn’t one person just put his sword on the ground and let their opponent smash the sword to pieces?

Never is this more evident than in Star Wars. Not just the prequels; all 6 movies have sword fights where characters endlessly smash their opponent’s lightsabers instead of hitting the person. Some of these fights are choreographed so well that you can’t tell at first that they’re not actually fighting. But the illusion can only last for so long before you start to notice that the characters have no interest in hitting each other.

Can you think of an example of a movie where the characters look like they’re hefting heavy swords and are actually trying to hurt each other when they fight? I just watched the Game of Thrones finale, and there’s one sword fight that looks fairly realistic.

This entry was posted on Sunday, June 3rd, 2012 at 10:05 pm and is filed under movies and tagged with contrivance, movies. You can follow any responses to this entry through the RSS 2.0 feed.