The Future of the Phone

Over 4 years ago on this blog, I wrote the following about receiving a phone call when you’re already on the phone:

Nine times out of ten, all I want to say to that person is, “I’m on the phone—I’ll call you back in a few minutest.”

So why is there not a button on your phone that does this for you? It can be a prerecorded message, and once you see the call come in, you can press a single button—again, a single button—and the second caller hears your voice telling them that you’ll call them back. How hard would that be? Fewer conversations would be needlessly interrupted, and fewer situations would happen where the second caller, if ignored, makes another call after they’re sent to your voice mail. In fact, you should be able to press that button for any incoming call—a “call you later” button.

Today, my friends, Apple caught up with jameystegmaier.com. See below for screenshots from the newest version of the iPhone software, followed by commentary and smugness. 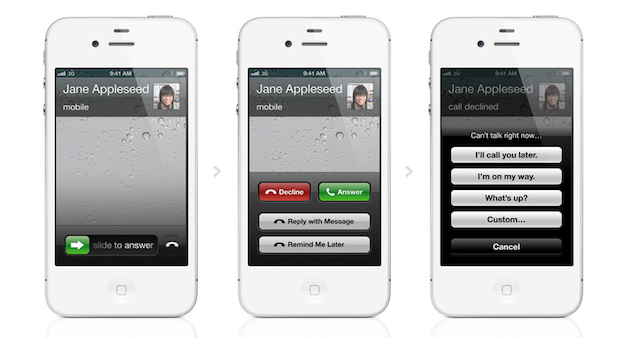 Coming this fall to iPhones everywhere, if you’re on a call or you simply can’t pick up the phone at that time, you can send the caller a customized message instead of ignoring them. I think this is more revolutionary than FaceTime. Because really, who uses FaceTime?

But I’ll definitely use this.

Now, before you strip down to your loincloth and start yelling about how Apple stole my idea, consider the following: One, Apple didn’t steal this idea. Steve Jobs didn’t read this blog. Someone at Apple thought of this idea independently of me and implemented this into iOS 6.

I’m saying this because I know a lot of people are needlessly protective about their ideas. Whether it’s an idea for a product, a website, a book, a service, whatever it is. But when you’re super protective about an idea, you lose all the benefits that come with sharing that idea and getting feedback about it. In fact, what will most likely happen is that you’ll share the idea and the other person will say, “Oh, I’ve heard of that–it already exists.”

“It already exists.” That simple phrase can save you thousands of dollars and hundreds of hours.

I share all of my ideas on this blog once I’m able to articulate them. In the off chance that someone with the resources and gumption decides to make one of them happen, it will make my day.

So thank you, Apple, for stealing my idea and making it happen. Now I can finally tell a caller, with a single click of a button, “These are not the droids you’re looking for.”

This entry was posted on Monday, June 11th, 2012 at 10:51 pm and is filed under brilliant innovations, technology and tagged with ideas, technology. You can follow any responses to this entry through the RSS 2.0 feed.

9 Responses to “The Future of the Phone”