On Saturday afternoon, a friend showed me a clever play on a wedding invitation. I laughed, shared it on Facebook with the message “There is merit to this,” and turned off my phone to watch The Amazing Spider-Man (it’s amazing!).

Check out the image I posted and see if you can guess the responses I had when I turned my phone back on. 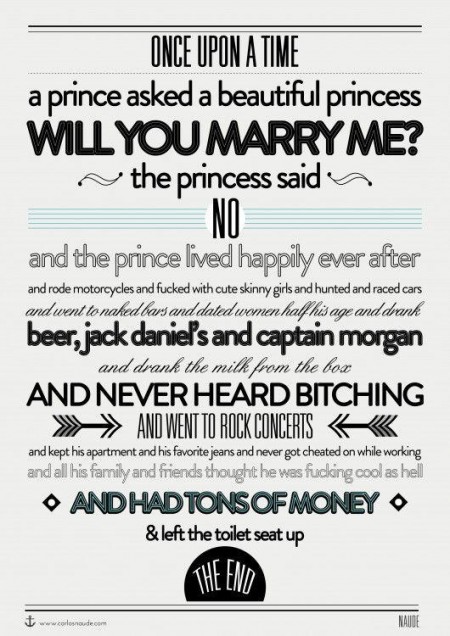 Now, I will say that a few minutes after posting this, I turned to my friend and said, “I’m going to get torn to pieces for posting that. It might be a bad idea.” I was mostly worried that (a) people would think that I agreed with all of those things–or wanted them, and (b) that it would convey the idea that I thought all women get in the way of men doing the things they really want to do.

That said, I think this image does actually have merit. These things could be true for someone who wants them. A single guy could definitely drink all the beer, Jack Daniel’s, and Captain Morgan that he wants. He could have tons of money. He could hunt.

The only part that’s not true at all is that “all his family and friends thought he was fucking cool as hell.” Come on. We all know some older dude–probably in your family, maybe an uncle–who is single, acts half his age, and looks twice his age. No one thinks that guy is cool.

Also, the post is unfair because it essentially says that you can’t have any of those things if you get married. Which, if you look at that list, isn’t true at all. You just have to find the right person.

Anyway, here were two of the first responses I got:

I love those responses. They’re totally true. The princess definitely dodges a bullet if she avoids marrying a guy who wants all of those things and believes that he can’t find a partner to share his love for at least a few of those things. Absolutely.

Again, very clever. But this one hit home with me, because I realized two things: One, this person’s comment made a lot of assumptions about men that I thought were unfair. Sure, the original post did the same thing, but it was a viral meme, not something I carefully composed. Two, my original post truly didn’t reflect my view on being single, and that was now important for me to represent.

So I wrote my own. It ended up being a little more vitriolic than I had intended it, but it felt good to write something so raw and true to my experience. Again, I’m not saying that all women fit the descriptions below, not by any means. But I am saying that by being single, I assure myself of the following: 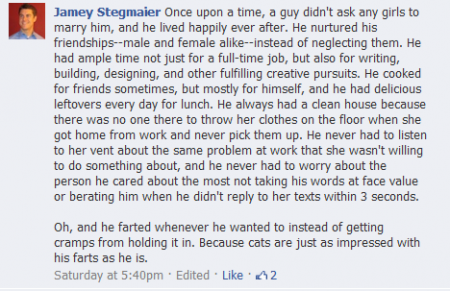 The post got a few Likes, but it didn’t generate any further conversation, which I thought was interesting (and disappointing). I can’t tell if I struck a nerve or if they had simply moved on to greater things.

I share all of this with you today because (a) it’s a good reminder to use your own words, not someone else’s, to represent yourself, and (b) because I’d love to know your thoughts on the comments and discussion above. What kind of a reaction do you have when reading the original post and the comments that followed? Should I have kept my final comment to myself?