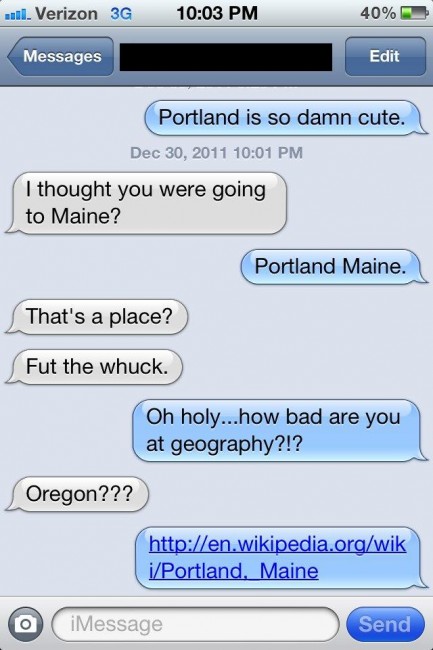 A few years ago, I was at a fancy fundraising event like the one in The Dark Knight Rises, except with less Batman and more me with a wedgie, and a young couple introduced themselves and started talking about their connection to the organization. Then the wife said something like this:

This confused me on a number of levels, so I just smiled and covertly adjusted my wedgie.

First, I was surprised that this couple had come all the way from New York to St. Louis for this event. Second, they didn’t seem like New Yorkers–I’m still not exactly sure how I perceive New Yorkers, but whatever it is, these folks seemed like they truly were from a small town, not a bustling city. And third, she had actually referred to her Manhattan as “a small town”–was that supposed to be ironic? New Yorkers and their “humor.”

It was only later that I discovered that there is actually a Manhattan, Kansas, and indeed, the couple was from that small city.

Needless to say, my confusion could have been avoided if this city had simply chosen a different name. That only seems fair.

I haven’t thought of that encounter until today when I saw the graphic shown here, as posted by a friend of mine regarding an exchange between her and her sister.

I have to say, I’m going to take the sister’s side here. When you say “Portland,” you think of Oregon, right?

No disrespect to Manhattan or Portland or any of the other cities that share names (there’s even a Portland, Texas), but I feel like when one city eclipses the other so much that people forget the smaller city exists, it should change its name to something new. Is that fair?

Also, one quick personal note: There are a lot of small towns in Missouri that have the names of countries. Among them is Mexico, Missouri. Many years ago, a girlfriend and I decided that if we ever got separated (like, in an apocalypse/martial law situation), we would tell announce loudly to anyone who would listen that we’re going to meet each other in Mexico. And then, when the world was hunting for us (why are they hunting for us? I don’t know. This is one of those just-in-case scenarios) in Mexico, we would meet in Mexico…Missouri. Ha! Unfortunately she and I broke up, and it was for the best. But a very small part of me still fancies the idea that one day the apocalypse will happen, and she and I will find ourselves on the same park bench in small-town Missouri as we watch the world end, hand in hand.

This entry was posted on Tuesday, August 28th, 2012 at 2:34 am and is filed under pet peeve and tagged with pet peeve. You can follow any responses to this entry through the RSS 2.0 feed.

13 Responses to “Pet Peeve #43: Cities That Share the Same Name”