Dr. Spielberg or: How I Learned to Stop Snarking and Love Collaboration

Today’s guest post is brought to you by reader and friend Bryce.

Like all of you, I have been eagerly watching Jamey’s Viticulture campaign on Kickstarter for the last several weeks.  I am proud to be a backer and I am excited to finally play the game when it arrives next spring (since he REFUSED to let me play the prototype version the last time we hung out in June…Jamey’s a great friend but he lives 800 miles away so we don’t hang out that often anymore).

I have, however, been giving Jamey a fair amount of grief over one aspect of his campaign that I have not been a fan of: the polls.  Pretty much from the beginning I have been encouraging Jamey to stop asking so many questions and just design the game that he wants to make.  My standard line has been something like “Jamey! It’s YOUR games, who care what anyone else thinks/feels/cares about?  Make the game true to your vision and don’t let other people muddy it up!”  As I have dutifully answered all of Jamey’s countless poll questions I have consistently rolled my eyes and I might have even sent Jamey a snarky text message or two (or 20).  But last night Steven Spielberg taught me the error of my ways and today I feel I need to apologize to Jamey. 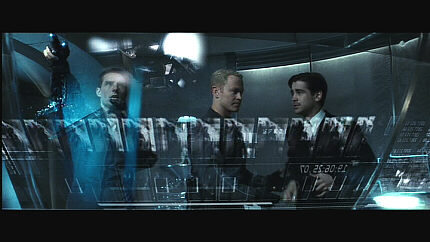 So I watched Minority Report last night (totally underrated, btw…quite possibly my third favorite Spielberg film, which probably ranks it in my top 20 all-time).  Anyway, I was watching some of the DVD bonus features after the show and realized how much of the look of the film is created and completed by people other than Steven Spielberg (there was a completely different team that shot and produced all the pre-crime scenes and just gave them to Speilberg to stick in his movie!)  I guess this should have been obvious, but it was something of a revelation for me and I was thinking “how can Spielberg ever be happy with his product when he has to rely on so many other people to come together and create the vision?” at which point it occurred to me that he (and all directors presumably) must actually enjoy the collaboration and must like to work with other people to create a common vision otherwise he would never do it.

It was then that my thoughts turned to Jamey and his Viticulture polls and how I had come down on him for listening to too many opinions and working them into his game.  And I kind of realized that Jamey might actually enjoy the collaboration and really want to get other people involved in his game.

Further, and more importantly, I realized that this is a FAR better way to live and to be. This is especially meaningful to me right now as I am currently working on a little project in my neighborhood and I recently met a guy that has a very similar but slightly different vision of essentially the same project.  We chatted the other day about working together, but I basically wrote him off because his goal wasn’t quite exactly the same as mine.  We essentially want to reach the same end but we have slightly different motivations and favor slightly different methods.  After establishing that our visions aren’t quite identical I pretty much thought “well, you do your thing and I’ll do mine and hopefully it’ll end well for both of us.”

But I realized last night that this is the most terrible thing I could do because without people like him I probably won’t get anywhere at all.  I was thinking that if Spielberg relied completely on himself to create his movies nothing would get done and he might be able to make one movie in his whole career (if that).  But by collaborating and sharing his vision, by allowing others to influence and help create his product Spielberg has built a beautiful and incredible body of work.

So all this is to say that I’m sorry, Jamey, that I was so harsh about your polls and thank you Steven Spielberg for the life lesson…and all the awesome movies!

What do you think? Do you prefer collaboration over individual work? Where do you draw the line?

This entry was posted on Tuesday, October 2nd, 2012 at 1:35 am and is filed under guest entry. You can follow any responses to this entry through the RSS 2.0 feed.

2 Responses to “Dr. Spielberg or: How I Learned to Stop Snarking and Love Collaboration”