At one point during my Kickstarter campaign, I learned from my manufacturer that I could receive not just one, but up to five advance copies of the game airlifted to me months before the huge shipment of games would arrive.

The project was fully funded by then, with 500+ backers, many of whom had said that they wished that the games would be delivered before May. Most of those backers had pledged $49 for a copy of the game and the first expansion.

So after I found out the cost of the shipping for the advance copies (it’s quite expensive to send 5-day DHL packages from China to St. Louis), I created a new reward level for 4 backers to be the very first people to get copies of the game. Based on the cost of shipping, I priced this reward level at $139.

It sold out almost instantly. 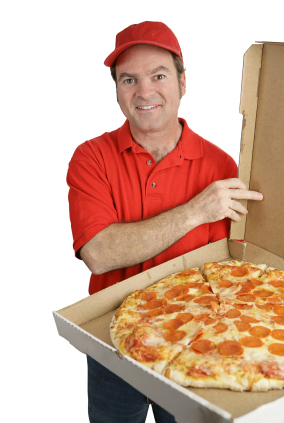 People will pay for priority. Not all people, but some people. And not just priority in terms of shipping/delivery. People will pay for priority for online ads as well. If you’ve ever made a Facebook ad, you know that you get to choose the range at which you’ll bid for ad space. You can bid low and still get your ads posted, but they won’t get posted as soon as higher bids. Same with Google ads.

What does this have to do with pizza? Well, the other day I had a hankering for Papa Johns. I got home a little later than I intended, so I was pretty hungry when I got online to build and order my pizza. I filled out all the information, including a pre-paid tip.

It was at the tip portion that I paused for a second. What if a higher tip would translate into faster delivery? I was really hungry, so I figured it was worth it to go for a slightly higher tip than normal, just in case.

I think the pizza arrived 25 minutes later at an off-peak hour, so who knows if it worked. But the experience revealed the idea that Papa Johns could let people bid on delivery times. They’d make more money, and customers would benefit from feeling like they had more control over their pizza delivery.

It would be a dynamic addition to the website that would change based on demand and time. The interface could be simple: You could see the top bid and the average bid for open orders from your local Papa John’s, and you could enter your delivery fee based on those other bids (this would be in addition to the tip and the price of the pizza–it would replace the standard delivery fee).

Or if you don’t need your pizza right away, you could enter no bid or a small bid. As active orders are closed (i.e., as the pizza leaves the Papa John’s location), the top and average bids change. So they would be lower during off-peak hours and you can still get your pizza quickly.

What do you think? Would you ever use something like that? What other examples of paying for priority have you seen?

This entry was posted on Friday, October 19th, 2012 at 12:59 am and is filed under ideas and tagged with ideas. You can follow any responses to this entry through the RSS 2.0 feed.

4 Responses to “Paying for Priority Pizza”