Who Wears the Pants?

Recently, in fairly rapid succession, I experienced or read about three gender-role situations that share a similar theme.

Situation One: The first happened when I got a really bad cold 2 weeks ago. I woke up on a Friday morning feeling terrible, and I e-mailed this to my staff: “Hey guys, I got hit with a cold pretty hard yesterday, and it continues to tell me who wears the pants in this relationship. So I’m out today.”

A coworker replied almost immediately (half jokingly, but mostly serious) that he was disappointed that I had chosen to address our mixed-gender staff as “guys” and that I used the phrase “wears the pants” since it perpetuates the idea that in a male/female household, the person who traditionally wears pants (the man) is the one in charge.

My first reaction was, “Really?” I was trying to be funny–they’re just words, right? But then I realized that they’re not just words. Words have a huge amount of power. And I could definitely choose mine more carefully. 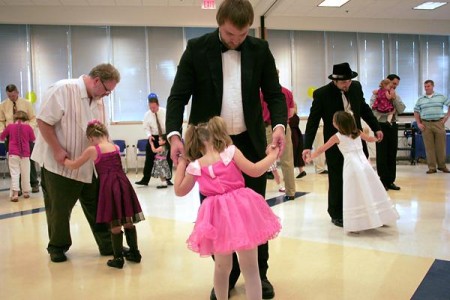 Situation Two: The second is word-related as well. I was playing a game with a few friends just a few days ago, and after a poor play by one of the men, one of the other men at the table said, “You play like a girl!”

“You play like a girl.” Again, just words, right? I don’t think so. I’m sure his intention wasn’t to say that girls are inherently worse at games than guys, but that’s what the words say. Just like the similar “you throw like a girl,” “cry like a little girl,” and the aforementioned “who wears the pants,” I wonder if it’s time to retired this phrase.

Situation Three: A friend sent me this article about how the ACLU is disavowing father-daughter dances. The author of the article is outraged. Although my reaction wasn’t as visceral, as I started reading the article, I was rolling my eyes a bit at what the ACLU was doing. Again, they’re just words, right?

Here was the turning point in the article for me:

“In the 21st century, public schools have no business fostering the notion that girls prefer to go to formal dances while boys prefer baseball games,” the ACLU said in a statement released this week. “This type of gender stereotyping only perpetuates outdated notions of ‘girl’ and ‘boy’ activities and is contrary to federal law.”

I actually think they have a pretty good point. Sure, the intent of the father-daughter dance isn’t to persist gender stereotype, but in it’s essence, that’s exactly what it’s doing.

Plus, it seems like such a simple solution to change father-daughter dances to parent-child dances. Is that really such a terrible thing, to say that one or both parents could go with their child to a dance, independent of gender?

What do you think? Are there other gender-related phrases that inherently put down women? Isn’t it time to remove such phrases from our lexicon?

This entry was posted on Tuesday, October 9th, 2012 at 1:17 am and is filed under Uncategorized and tagged with debate. You can follow any responses to this entry through the RSS 2.0 feed.

6 Responses to “Who Wears the Pants?”