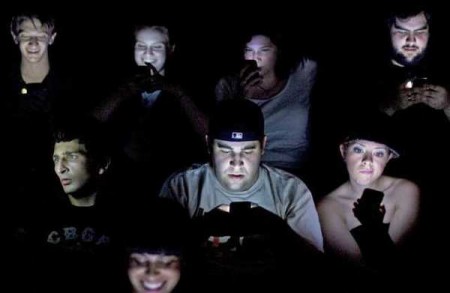 I went to see Skyfall this past weekend (one-word review: eh). Like any movie-viewing experience these days, I was pulled out of the film several times by people in front of me who decided that they couldn’t wait a single minute more without checking their phones. In a dark theater, the light from one cell phone screen goes a long way.

Some theaters are wisely taking action against the use of cell phones–any use, even just looking at the screen. I say “wisely” because providing a positive movie-viewing experience is their livelihood. If you have a bad experience in a theater, you might be slightly more inclined to stay home and watch The Avengers on your flatscreen instead of spending $20 at the theater for a ticket, soda, and popcorn.

One theater chain, the Alamo Drafthouse in Austin, will straight-up kick you out of the theater if you look at or use your cell phone. The audience is warned about the policy before the movie, and one of their workers stands in the theater for the duration of the movie to keep an eye out for cell phones. I like that policy and hope to go to one of their theaters when I visit Austin.

Another theater chain, Cinemark in California, is trying the exact opposite approach. When you buy your ticket, you’re invited to download a smartphone app that you then activate before the movie begins. The app monitors cell phone use during the movie, and if you don’t look at your phone or use it at all, the app will send you a coupon for a discount for tickets, drinks, or popcorn the next time you attend a Cinemark movie. It’s a brilliant approach to solving the texting problem.

Here’s why it won’t work:

Case in point, a classic real-life example described by behavioral economist Dan Ariely: A day care was dealing with parents who were increasingly late to pick up their kids. So the day care decided to start charging parents $20 every time they were late. Clever, right?

Not so much. All this did was replace the social faux pas of being late with a palatable fee. Thus even more parents picked up their kids late than ever before. Now they didn’t have to feel bad about being late since they were paying for it.

Despite Cinemark’s move being one of positive reinforcement instead of negative reinforcement, I believe the effect will be the same. Now if you really want to check your fantasy football scores during a movie, you’re sacrificing $1 off at concession instead of the ire of the person behind you. Sure, that person might still be pissed, but who are they to complain? If they want to keep their phone off, that’s their choice to make for the price of a dollar.

What do you think? How would you solve this problem if you ran a movie theater?

This entry was posted on Tuesday, November 20th, 2012 at 12:42 am and is filed under behavioral economics, movies and tagged with movies. You can follow any responses to this entry through the RSS 2.0 feed.

8 Responses to “Texting in Movie Theaters: What’s the Solution?”