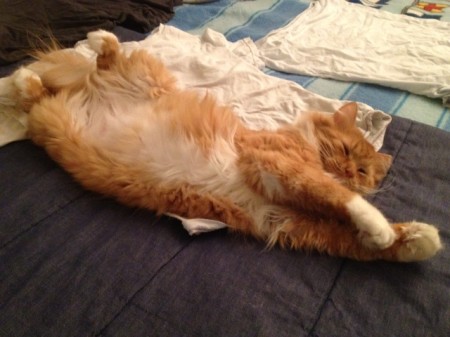 I don’t want to affect your top picks with a photo of one of mine, so instead I present to you: Walter’s belly.

Every year on the blog, I post a list of my favorite movies, books, songs, and blog entries that I watched/read/heard/and wrote for the first time that year (thus if I saw a movie that was released in 1988 for the first time in 2012, it qualifies for the list). I’m going to do the same for 2012 during the first week of January, but this year I’d like to include your favorites as well.

As a special perk for you giving me that information–specifically, for distilling it down to ONE pick per category and entering it on this Google Form–I will give away one paperback copy of Winter Wonders to one of the people who fill out the survey (Winter Wonders is a just-released short-story anthology that includes one of the best short stories I’ve ever written). If more than 20 people reply to the survey, I’ll give away two copies of the book. So feel free to share this with one friend whose taste in movies, books, and songs you respect.

The survey is very short–name, e-mail, and the four categories. All of the questions are optional, so if you didn’t watch any movies in 2012 or you can’t recall any particularly special blog entries of mine from this year (that’s a tough one to answer, so I don’t expect many to answer it). The survey will remain open until I put together these lists in late December, but you’re probably going to forget about it by then, so just fill it out now. All answers to the survey will be shared on my blog in some form in early January. Thanks so much for sharing your favorites with the world!

This entry was posted on Sunday, December 9th, 2012 at 11:27 pm and is filed under contests, favorites, poll and tagged with favorites. You can follow any responses to this entry through the RSS 2.0 feed.