How to Eat Your Way Across Austin, Texas: A Photo Blog

Two and a half years ago, my friend Eric quit his job as a lawyer and moved down to Austin with his girlfriend to pursue the dream of owning a restaurant. 8 weeks later, he had a food truck called The Peached Tortilla up and running, and he’s been quite successful.

I’ve been wanting to visit Eric and Kris (and eat Peached Tortilla food, of course) for a long time. I had been to Austin once about 5 years ago for work and loved it, so when I realized last month that I had enough frequent flier miles saved up, I jumped at the chance to visit my friends.

A quick note before I share some photos from the trip: When I take a travel vacation, I don’t like to try to see and do everything. I end up exhausted from those types of trips, which isn’t the point of a vacation to me. Plus, I greatly prefer making memories than going around to every historic landmark and taking a photo in front of it. It’s just not my style.

One of the key ways that I make memories on trips is eating local food. After all, they say the sense of smell is the most closely tied to memories, right? And the nose is connected to the mouth, or as I like to call it, the “the place where food goes.” Hence the forthcoming ratio of food photos to non-food photos.

One of the reasons I was really looking forward to this trip was the warm Austin weather. It’s been in the 20s in St. Louis the last few weeks. Winter in Austin is just a tad bit warmer… 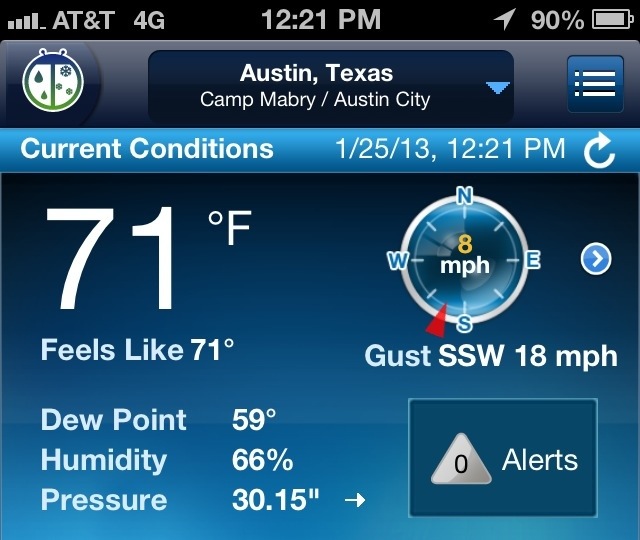 It was dinnertime when I arrived last Thursday, so we went straight to a restaurant. Apparently the latest food fad in Austin is ramen, which I could not be happier about (it’s on target to be a craze in St. Louis in 5-6 years). I ate ramen at least once a week when I was in Japan, but I haven’t had it since then. Just like in Japan, the line at this place was out the door–I’m telling you, the nostalgia was off the charts. (I also just remembered that I posted this photo on Friday. I want it all in one place here, though.) It’s called Ramen Tatsu-ya. 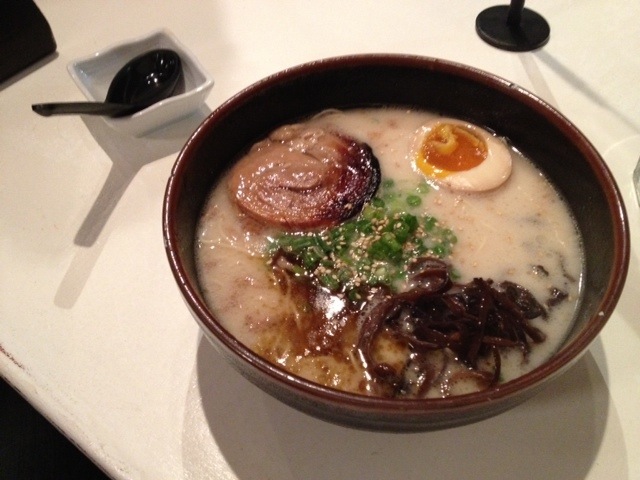 On Friday we went to an amazing taco place called Taco Deli (not a great name, but seriously, I’m still thinking about the Cowboy taco). I was pretty tired after that, so Eric and Kris’ dog, Jetta, joined me on the couch for a nap. Have you ever taken a nap and woken up to find that there are photos of you sleeping on Facebook? It’s surreal. 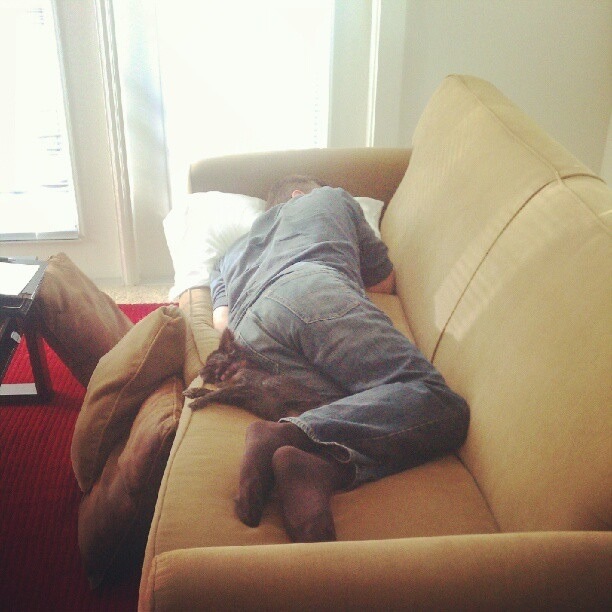 Afterward, we went to an area near the University of Texas to oggle at college girls and achieve one of my life goals: eat at a restaurant owned by a Top Chef winner. In this case, it wasn’t just any Top Chef winner–it was Paul Qui, one of my favorite contestants ever. He has a series of food trailers across the city, as well as a restaurant/dive bar inspired by his food trucks. We essentially ordered his food truck food. Here you can see the pork buns (decent), Thai chicken (awesome), fried brussell sprouts (spectacular), and fried beets (eh. The aoli was a little too heavy on mayo). The food was prepared in true Austin style by three hipsters. 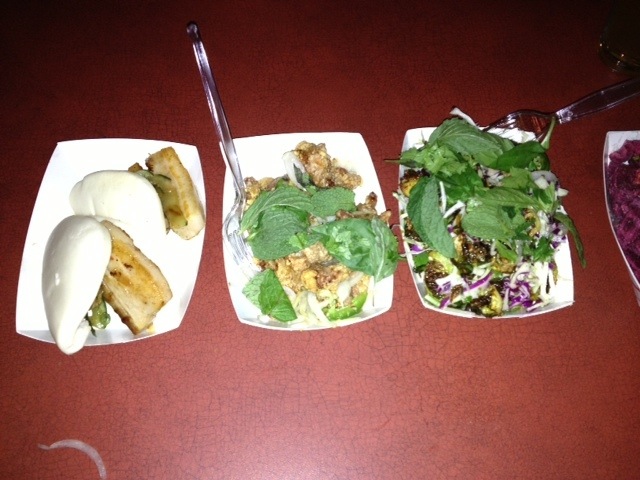 After that we unlocked another one of my life goals: Go to a movie at the Alamo Drafthouse. You see, for the past 12 years I’ve read a movie review website called Ain’t It Cool News. The owner of the site, Harry Knowles, talks endlessly about the Alamo Drafthouse. It’s one of the first theaters where you can order a variety of food from your seat, and waiters deliver it to you. They’ve also gotten press recently from their extremely strict (but totally justified) rules for not allowing cell phone use of any kind in the theater. If they catch you even looking at your phone more than once, you’re thrown out without a refund. They’re trying to keep the theater a great place to see a movie, and they’re achieving that goal remarkably well. In addition to that, when you buy a ticket there, you reserve specific seats in the theater, and there isn’t a bad seat in the house. Also, before the movie, instead of ads you get a 30-minute series of clips of the actors’ previous roles. We were there to see This Is 40 (my review: “This is 40 minutes too long.”), so there were a number of Paul Rudd clips and a few others from the other actors. It really set the tone for the movie itself, which I loved. My only disappointment (other than the movie. My review: “I bet the horror movie ‘Mama’ is funnier than this.”) is that the popcorn was pretty bad. Aside from the movie (my review: “Please let Lena Dunham write Judd Apatow’s movies from now on.”), it was an amazing movie-watching experience. (Note: I did not take this photo. As noted, you’ll get kicked out if you use your phone here.) 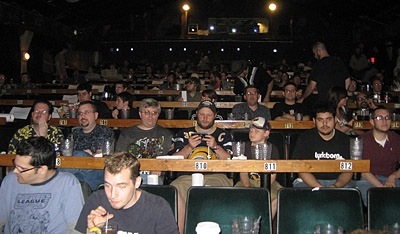 The next morning, I finally got to go to The Peached Tortilla. Before I get to the food, I want to say that I was impressed by the sheer size and layout of the truck. Look at this thing–trucks in St. Louis don’t even come close to looking like this. Very cool. Eric was kind enough to get me an order of fries with egg and bacon jam, a bahn mi taco, and a Yume dog (a hot dog with crispy onions and some amazing sauces). I wish I could have eaten more, but I was stuffed. I’d say this even if Eric weren’t my friend: If you’re in Austin, you need to track down The Peached Tortilla and eat their food. Seriously. 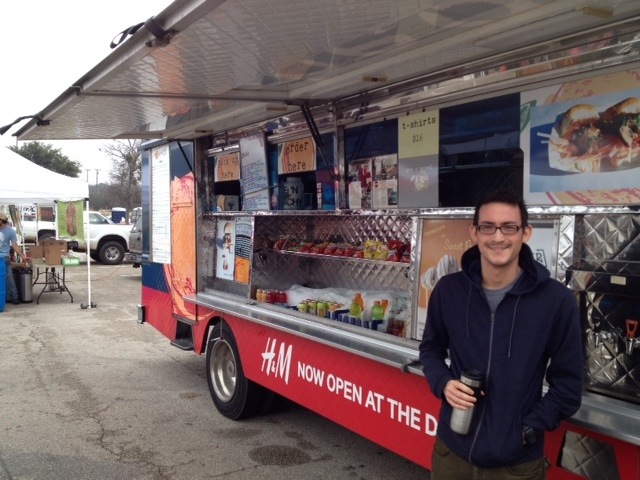 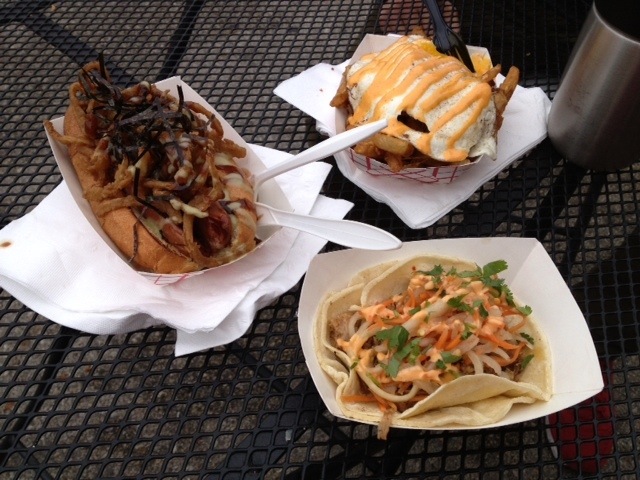 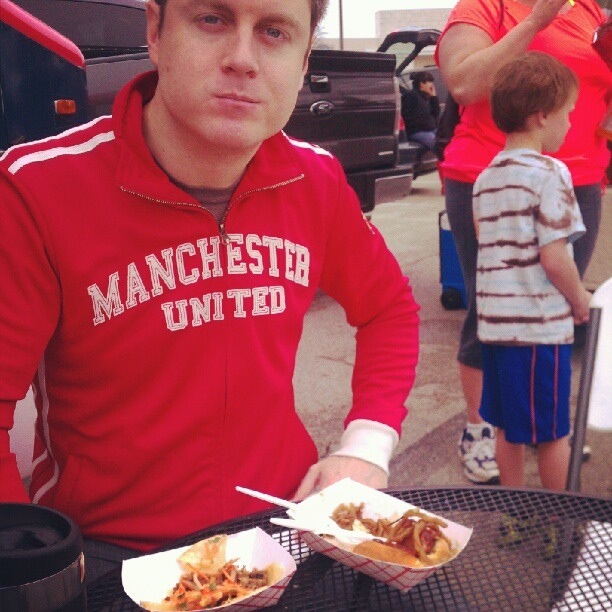 In the afternoon, Eric had to work an event at Kong Screenprinting, so I tagged along and was joined by another St. Louis friend who now lives in Austin. We caught up for a while and eventually went back to her place to check out her…chickens. Yep, she has chickens living in her backyard. Who knew that there were so many different colors of chickens?! I wanted to cuddle with them, but they weren’t interested. 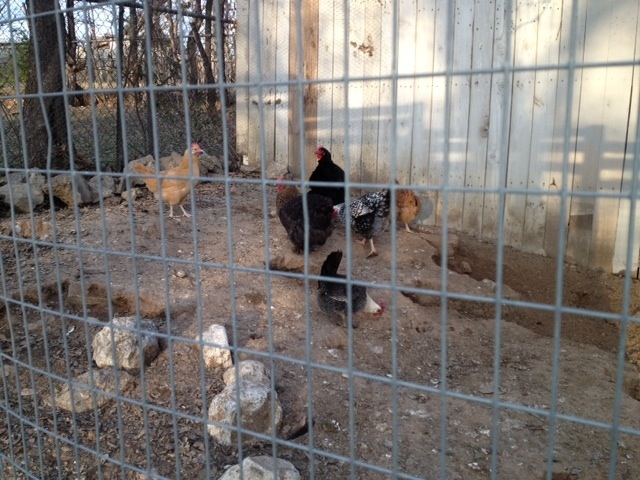 I have an uncle once removed who lives in Austin, and by sheer coincidence, I found out though my cousin that the uncle was throwing his big annual Burns Night party this year. This isn’t the typical Austin experience, but it’s a pretty cool concept, so I thought I’d share. Apparently there is a famous Scottish poet named Robert Burns. 7 years ago, my uncle (who shares the Burns last name) decided that he would host a big Scottish party every year, complete with poetry readings. Eric and I realized that of all the places in Austin, my uncle’s house was within walking distance of Eric’s apartment.

Burns Night has become a pretty huge party–I think there were over 50 people in attendance, many of them in kilts. This photo shows my uncle concluding the poetry portion of the night with a moving rendition of Auld Lang Syne, of which, I learned, I only know three words. 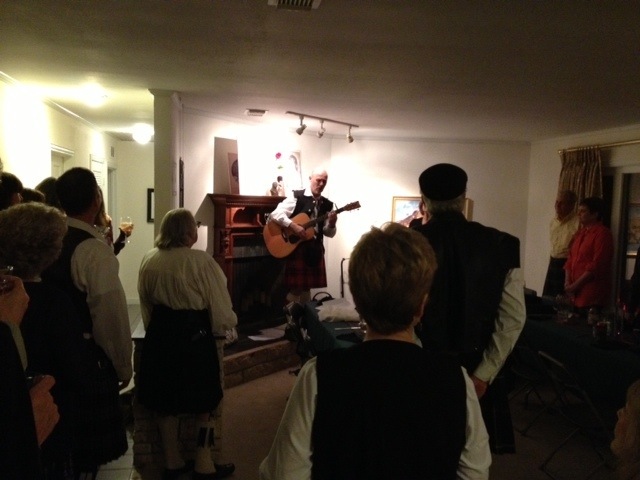 And that’s Austin, my friends. Have you been there? Would you recommend anything that I missed? The one thing I noticed about the city that I wasn’t a big fan of was that it kind of felt like a massive strip mall. Also, the hipsters were a little over the top, but it was so normal there that I was probably the true hipster for dressing so normally and having no facial hair.

Also, there’s nothing better about traveling than coming home to your family: 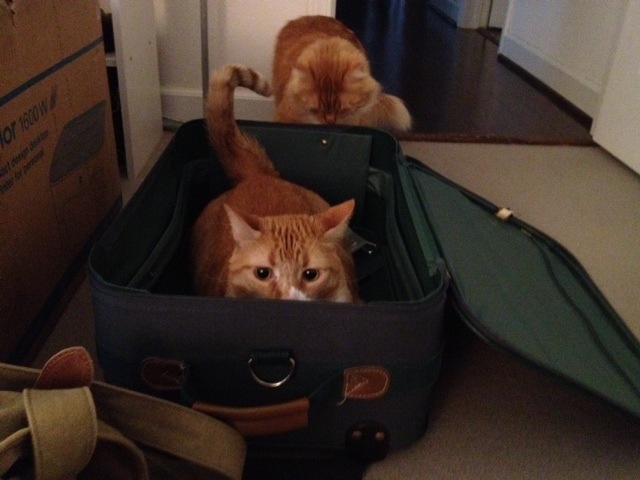 This entry was posted on Sunday, January 27th, 2013 at 10:02 pm and is filed under travel and tagged with Austin, travel. You can follow any responses to this entry through the RSS 2.0 feed.

16 Responses to “How to Eat Your Way Across Austin, Texas: A Photo Blog”