After reading a compelling article by ESPN columnist Rick Reilly today, I shared my thoughts with him by e-mail. Here is that e-mail. He was kind enough to reply, saying that he doesn’t agree with me, but he appreciated the thoughts. I still agree with me, though.

You wrote about an interesting and challenging topic in today’s article and I thought I might share my perspective as an adopted child who is ambivalent about meeting my birth mother. (I also happen to be a 49ers fan.)

The impetus for me writing is that I’m surprised you’re chiding Kaepernick in public for making a very personal choice. I think the situation would be different if Kaepernick publicly said negative things about his birth mother, but from your article, it just sounds like he’s not interested in connecting with her. It’s neat that your daughter was compelled to meet her birth mother, and it’s great that you were supportive of that choice. But just because Kaepernick has a different mindset than your daughter doesn’t make him wrong. It just seems odd that you would expect a stranger to make such a personal choice.

Here’s the line that really stood out to me–there’s a lot of judgment in this line: “That’s odd, since many adopted kids are crazy curious about their birth parents, and their adopted ones.”

My situation is fairly similar to Kaepernick’s. My biological mother made the extremely loving, generous choice to give me up for adoption because she wanted me to have a family, not a single mom. I was adopted by my parents (I don’t call them my “adoptive parents”–although that’s accurate, my parents are simply my parents) three days after I was born.

My parents told me I was adopted from a very young age, and they also told me whenever we received a letter from my biological mother. I had no ill will towards her, but, as you said quite accurately in your article, I didn’t want my parents to think for a second that I was more curious about a stranger than I was about them. None of this came from them, of course–my parents were incredibly supportive of any choice regarding my adoption that I wanted to make.

My sophomore year of college, it occurred to me out of the blue that I might have a sister out there who was my age, and I didn’t want to accidentally date her. So based on that (and a tepid curiosity about any inherited diseases I wasn’t aware of), I read the letters that had accumulated over the years, and I wrote one to my biological mother.

And you’re right–receiving my letter was incredibly healing…for her (I never felt like I needed healing). She wrote back that she had wondered for so many years if I had held it against her for giving me away, and I responded to assure her that the thought never crossed my mind. Giving a child up for adoption is an incredibly selfless, generous, loving decision, and I’m so thankful she made that choice. I think she likes to hear that from me, as it often comes up in the e-mails we exchange a few times a year.

My biological mother lives about a 4-hour drive from where I live. I could easily drive out there and meet her. And if she were ever in St. Louis, I wouldn’t be opposed to grabbing a bite to eat with her. But as it stands, we’ve never met, because I’m completely ambivalent to meeting her. I’m 32 now, and my adolescent concerns of protecting and reassuring my parents are no longer a factor at all. I’m just truly ambivalent to meeting her. I hung out in her womb for 9 months, and then my parents raised me. Why would I want to meet a random stranger in Indiana?

I think I can relate to Kaepernick, but I can’t really know. Every adopted kid is different. Again, I think it would be completely different if Kaepernick had a really negative outlook about his biological mother. I think that would be unhealthy for him, and as a public figure, unhealthy for other adopted kids out there who look up to him.

But as far as I can tell from your article, that’s not the case at all. He’s just ambivalent. And there’s absolutely nothing wrong with that.

Your article isn’t particularly incisive, but there is judgment there about Kaepernick’s choice, and I don’t think that’s fair to him. I also agree that Kaepernick reaching out to his biological mother could be healing for her (but not, as you say, “A meeting like that could fill two hearts.”)

I think the crux of your article (as you say in the last line, “What better way to pay her back?”) is that Kaepernick OWES his biological mother. I guess I just don’t think that’s fair. Kaepernick didn’t choose to be born, nor did he choose to be adopted. That’s like saying that your daughter owes you for raising her–that’s not an agreement she opted into. Nor did Kaepernick.

So rather than focus on what Kaepernick isn’t doing for a stranger who just happened to carry him in her womb for 9 months, why not focus on the way Kaepernick loves his parents? It’s a subject I know nothing about because Rick Reilly chose to write a very different article. But based on that photo of Kaepernick in his Nevada uniform, he has a lot of love for the two people who chose to be his parents, and I think that’s awesome. I’d love to read more about that.

You certainly got me thinking, and I appreciate that. I will probably publish this letter on my personal blog, jameystegmaier.com. If you respond, please let me know if I have permission to post your response (I won’t speak poorly of you at all if you choose not to–I completely respect that). 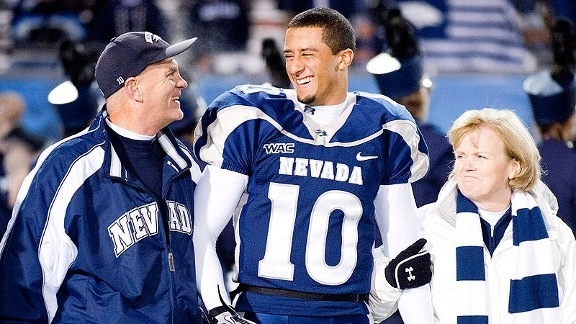