The Tournament of Made-It-Myself begins today! We have a submission pool of 9 creators and their projects, so they all have pretty good odds for walking away with an iPod Shuffle and an $18 donation to their charity of choice. Round 1 will be posted this week, with polls closing at 2:00 CST on Sunday. It will be followed by two more rounds to determine the winner of the tournament.

A note to the contestants: You may vote for yourself once, and you may solicit friends and family to vote (again, one vote per person–the same applies to all readers). Thank you for your varied submissions, and to those of you who tried to submit babies to the tournament…well, good try. If my seventh-grade sex ed class taught me anything, it’s that it takes more than two hands to make a baby.

If you want to follow this tournament, you can subscribe to this blog in Google Reader or on our Facebook page. If you’re new here, feel free to poke around a bit. I respond to comments, even if they’re on entries from years ago.

Our first contestant is Mary L. from St. Louis. Mary’s project is an impressive vintage mail sorter/chalkboard, which she describes as follows:

The attached photo is a mail sorter/chalkboard I created not too long ago for my kitchen. I was influenced by some window shutters I received from a neighbor who was changing out their outdoor home decor. I worked hard to hallow out one of the shutters (power tools came into play) and used the inner shades for the mail sorter in this project. I created the frame from cut pine wood and added an old, vintage look by beating it up a bit (that was the fun part!). I then stained the outer frame and glued it to a wooden backing. I placed the window shutter in one side and painted a spare piece of thin board with chalkboard paint for the other. I then used chalk to freehand some chalkboard art welcoming readers to our kitchen! TA-DA! And so my kitchen wall is no longer bare! 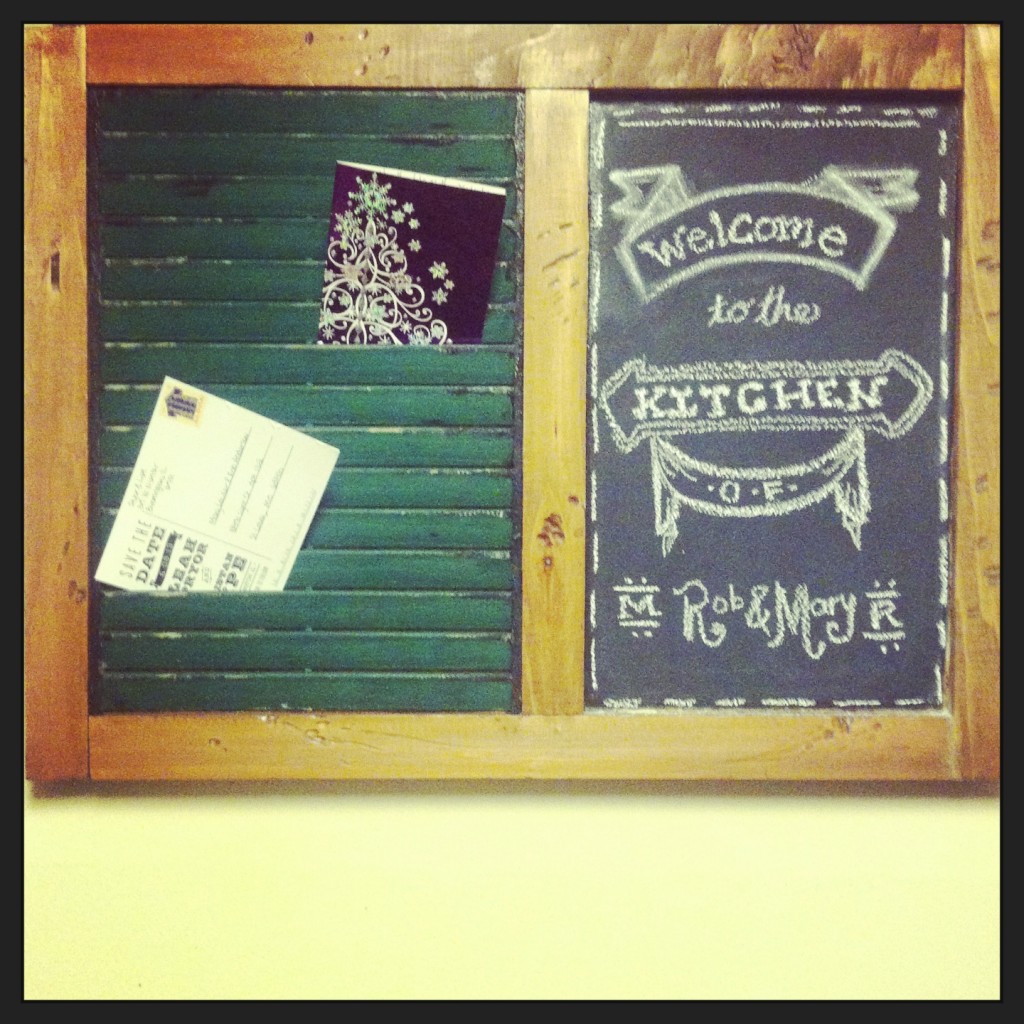 Mary is going head to head with Katy A., also from St. Louis. Katy submitted an elaborate entertainment center from IKEA. We’ve all tried to assemble something from IKEA “instructions,” so I’m sure you can relate to the degree of difficulty. Here’s Katy’s story:

I’ve always fancied myself as a “do-it-yourself-er,” and over the years have come up with some pretty interesting creations, but the project I’m submitting was one of the more challenging to assemble. When I moved into my apartment last summer I was very excited to finally be able to assemble and use an entertainment center from IKEA that I had inherited from my sister and her husband a few years prior when they were moving out of state and knew they would not have space for it in their new home.

At the time I didn’t really have a place to put this giant piece of furniture either, but had plans of either purchasing a home or apartment that would be large enough to accommodate the piece, so for a few years it sat dismantled in my parents’ basement until I could use it. Since the unit had been assembled previously, the original box had been thrown out, so I was left with a stack of different sized pieces of wood, a bag of assorted hardware needed to reassemble it, and the instructions (which in true IKEA form contained only vague illustrations of the assembly process and not much else).

After spending a long and tiring day moving all of my stuff, my volunteers quickly escaped before I could recruit any help to put together my furniture, and I was left the task of completing this large project by myself. Using the pictures in the book, I was able to get a pretty good idea of what needed to be done, and in what order, but when I went to grab the proper tools I realized I only had a cordless screwdriver and no hammer or mallet, so I decided the extra manual can opener, which has a sturdy rubber handle, would suffice as a temporary hammer/mallet.

In hindsight, I probably should have called a friend over to help me with this project, or at the least recorded the process, because it was quite an eventful afternoon of errors and I probably ended up building and taking apart the entire thing several times before I was able to get all of the pieces in the proper places. The can opener didn’t quite survive the experience, as near the end of construction, the rubber handle separated from the top part, leaving me with a broken kitchen tool (luckily I had a spare).

Once done with the building of the unit, I was faced with another problem: finding a way to move it from the floor to a standing position against the wall. I knew it was made out of wood/particle board, but didn’t realize just how heavy it would be once everything was attached. If I had to guess at the weight, I’d say between 150-200 pounds, and I’m not really strong enough to lift anything that heavy.

After trying to simply lift the thing up from its spot on the middle of my living room floor with no success, I finally pushed it closer to my couch, and once I had it raised about a centimeter, I slid a rubber flipflop under one edge to get it slightly off the floor. Probably an hour later, I finally managed to “walk” the entertainment center up to a vertical position using dumb luck and sheer willpower, since at this point I was a tired and sweaty mess from the ordeal.

While I’m proud to say I did this project myself, next time that beast of a tv stand needs to be moved or assembled, I’ll definitely call in some reinforcements. 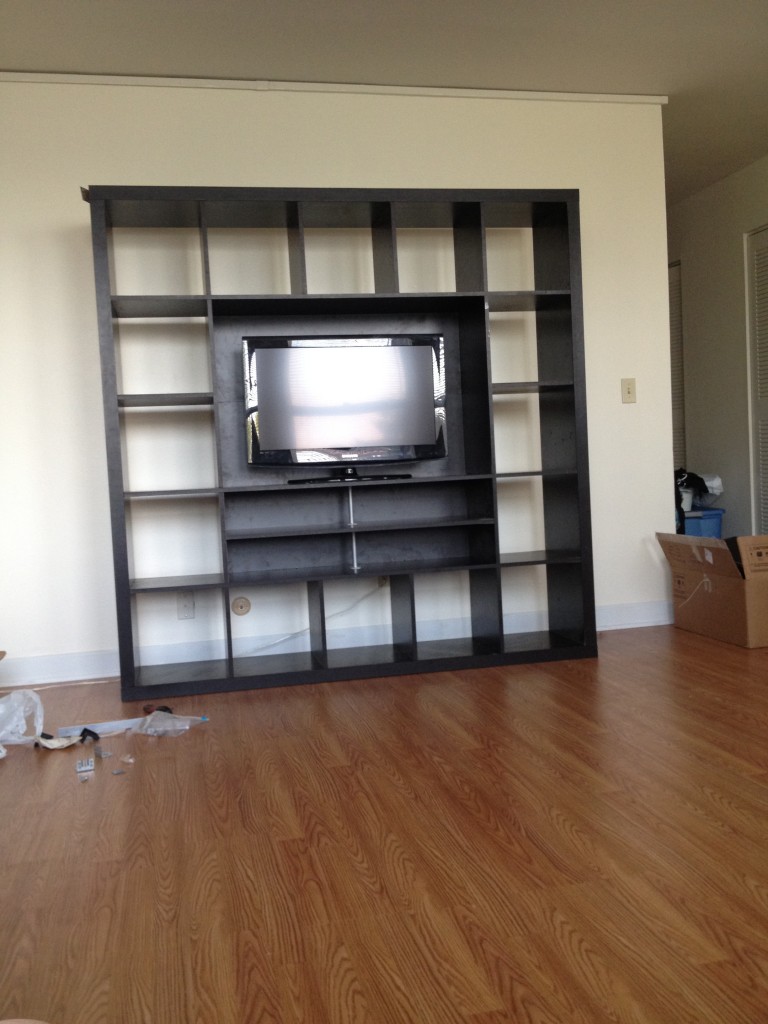 This entry was posted on Sunday, February 17th, 2013 at 6:08 pm and is filed under contests and tagged with Tournament of Made-It-Myself. You can follow any responses to this entry through the RSS 2.0 feed.

6 Responses to “Tournament of Made-It-Myself: Round 1.1”

Leave a Reply to Jasmin