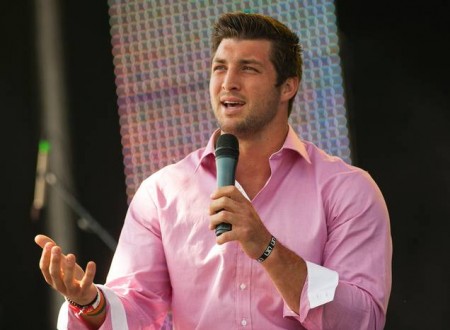 A few years ago, I applauded Tim Tebow for his charitable work despite my view of him as an overrated quarterback (look how that turned out). I’m sure he’s a very nice guy, and I really do think highly of celebrities who use their wealth and fame to improve the world.

That said, I’m hoping Tebow can take a joke, because that’s what today’s blog entry is.

I read an article on ESPN today about a recent motivational speech that Tebow delivered to the Wichita State men’s basketball team after their upset win over Gonzaga in the NCAA tournament. The thing is, Tebow has no connection to Wichita State, nor does he know any players on the team. His flight just happened to be refueling when the team bus arrived at the same airport.

So naturally, Tebow did what Tebow does: He climbed onto the bus and gave a motivational speech. I’m sure some of the players thought it was cool, but I’m equally sure that other players were wondering why Tim Tebow was giving them a speech. The following paragraph is from the original article. The segments to follow are completely fictional (as of this writing).

“Tebow got on the team bus, grabbed a microphone and told the players their surprising run to the Sweet 16 is something they will remember for the rest of their lives, regardless of what they do in the future. He also congratulated them and said they were an inspiration to many people.”

“As Washington High School was preparing to receive their award for winning the cross-country meet, Tebow–who was purchasing a corn dog at a nearby concession stand–grabbed the mic and told the runners their surprising run to regionals is something they will remember for the rest of their lives, regardless of whether or not they ever accomplish anything else. He also congratulated each one of them by name, using ‘John’ for all the men and ‘Jane’ for all the women, and said that they had inspired him to work harder to try to be the Jet’s second-string quarterback.”

“As H&R Block Unit #3,158 celebrated the end of tax season at a local Applebees, Tebow–who claims Applebees to be his favorite restaurant–stood up on one of the tables and told the accountants their surprising run to April 15 is something they will remember for the rest of their lives, or at least until the following tax season. He also congratulated them for ‘being much more attractive than in the commercials’ and said that they had inspired him to someday do his own taxes.”

“As Havenwood Montessori Pre-School concluded their annual end-of-year open house, Tebow–who was picking up take-out at a nearby Applebees–hoisted two of the children onto his shoulders and told the teachers that their emphasis on independence, freedom within limits, and respect for a child’s natural psychological development is something the children will benefit from for the rest of their lives, unless they decide to pursue careers in professional sports. He also congratulated the children for their arts and crafts skills and said that they had inspired him to finish the dreamcatcher he started back in high school.”

“As recent college graduate Jeffrey Peterson woke up to find a girl who was way out of his league next to him in bed, Tebow–who had given them a drive home from the bar and provided a steady stream of condoms and words of encouragement during the sexual activity that followed–slid two platters of breakfast food  onto the bed and told Peterson that his surprisingly successful pursuit of the girl (who Tebow called ‘Jane’) is something he will remember for the rest of his life, or at least until the next bender. As the girl awoke from her slumber, Tebow handed her a freshly ironed thong and said that her sexual freedom and prowess would be an inspiration to him after he got married.”

Make your own Tebow paragraph below in exchange for my eternal admiration. Also, if you want to read about another athlete whose words moved me considerably more than Tebow’s, check out this article in the NY Times by linebacker Scott Fujita.

This entry was posted on Monday, March 25th, 2013 at 9:07 pm and is filed under humor, Newsflash and tagged with humor. You can follow any responses to this entry through the RSS 2.0 feed.