What Happens When an Unstoppable Force Meets an Immovable Object? 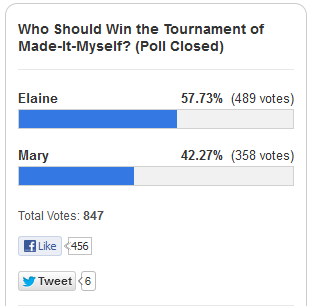 The title of this entry refers, of course, to the Tournament of Made-It-Myself Final, which began last Thursday and quickly became quite the thrill ride, right up until when it ended on Sunday at 2:00.

Mary and Elaine threw the full force of their social media networks behind this competition, and I’m astounded and moved by the results. After all, my hope is that some of the newcomers who vote on these tournaments end up poking around a bit and maybe even become regular readers, so I’m honored that Mary and Elaine would tell so many people (847 voters!) about the blog. Thank you and congratulations to you both.

But most importantly, it’s time to congratulate Elaine and crown her the winner of this tournament. I asked her a few days ago where all these votes were coming from, and it turns out that Elaine was largely driven to win the tournament to support her friend Danny, who is recovering from a horrific incident where he protected his sister from an assailant but was stabbed multiple times in the head as he saved his sister’s life.

When Elaine told me that, she and Mary were dead even–there were several times over the past few days when they had exactly the same number of votes (Elaine eventually pulled away on Sunday after other supporters of Danny spread the word far and wide). But after hearing about Danny’s story–and learning from Mary about her passion for the charity she’s supporting through the tournament, the Delta Gamma Center for Children with Visual Impairments, I decided that I would donate the prize winnings to both finalists no matter who won. I made the donations right before posting this entry.

Of course, the winner still gets the iPod Shuffle and the pride of being the most crafty and creative.

This entry was posted on Sunday, March 10th, 2013 at 10:51 pm and is filed under contests and tagged with Tournament of Made-It-Myself. You can follow any responses to this entry through the RSS 2.0 feed.

3 Responses to “What Happens When an Unstoppable Force Meets an Immovable Object?”