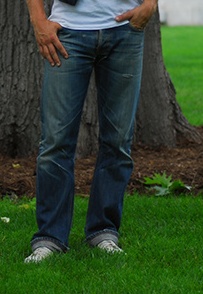 Last year I did a video review of a service called Trunk Club on my blog. Trunk Club sends you a big box of high-quality clothing catered to your tastes. It’s free to get the box, and you only pay for what you keep.

As noted in the video, one of the pairs of jeans I tried on was by far the most comfortable pair of jeans I’ve ever worn in my life. They had a little elastic in the waist and the crotch, which is ideal if you have man parts. I still think about those jeans.

That last line insinuates hindsight, which is accurate. Although they were the most comfortable jeans I’ve ever worn, I couldn’t bring myself to spent $180 on them. My typical spending limit on jeans is $50. And I literally own two pairs of jeans.

But here’s the thing: $180 might be a lot of money, but imagine how many times you’ll wear that pair of jeans. I would probably wear them twice a week every week for about 5 years, if not more. I’ll get 520 uses out of those jeans, or $0.35 per use. That’s an incredible value for the most comfortable jeans ever made.

So how do you convince someone like me to dish out the $180? Is it possible? Is there a better way to structure that sale so that someone like me takes a chance on something that’s more than 3x more expensive than what I’d normally pay for it?

14 Responses to “The Nice Jeans Conundrum”