A friend just called me with a very interesting dilemma that–in my opinion–has no clear answer. After debating it for about 15 minutes without finding a clear answer, I proposed a solution: Let’s put it on the blog and let my readers decide. This is a real life decision that you will impact if you read this entry and vote on it ASAP.

My friend–whom I will call Sally–is attending an upcoming out-of-town conference with a number of her colleagues. Sally’s organization is providing rooms in a nice hotel for the entire group.

Before the organization booked the rooms, Sally requested a single room in the off chance that any were available (most of her colleagues are sharing rooms). She figured it couldn’t hurt to ask–after all, it’s a nice luxury to have a hotel ro 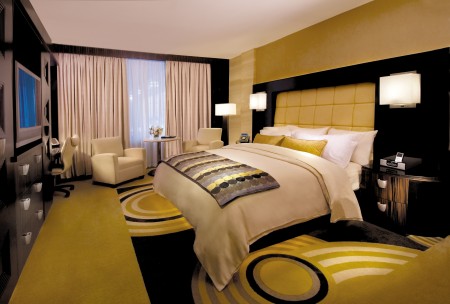 Unbeknownst to Sally, another one of her colleagues–a woman we’ll call Octavia who Sally doesn’t know well–also requested a single room. Octavia has a boyfriend who offered to join her on the conference trip to celebrate her birthday, and they hoped to “celebrate” the occasion (if you know what I mean, wink wink) in a room of their own. I’m envisioning some amount of roleplay ala Mr. & Mrs. Smith, maybe some ice tickling, and at least one Reverse Willy Wonka if they’re flexible.

But that’s beside the point. You see where this is headed. Both Sally and Octavia were told that getting a single room “shouldn’t be a problem,” and they made plans accordingly.

When the room assignments were decided (to our knowledge, by sheer randomness–no preference or favorites), Sally got a single room and Octavia did not. This is when Sally learned of Octavia’s existence. Octavia e-mailed Sally and asked her if she would switch places with her. Sally would room with another person she doesn’t know, and Octavia and her boyfriend would have full use of pay-per-view erotica all to themselves.

Just to clarify: I am not Sally or Octavia. Those are not code names for my cats. This really is about a friend. I want to make that perfectly clear.

So the dilemma: What should Sally do? On one hand, she could keep the room. Luck of the draw, she might as well enjoy herself. Objectively, Octavia doesn’t deserve the room more than Sally, nor did she offer anything in exchange. If Octavia really wanted a single room, she could purchase one with her boyfriend. After all, the boyfriend is getting a free ride (in more than one way). If Sally gave up the room, she would essentially be saving Octavia $300 for the cost of a room. Also, it’s not like the boyfriend lives in the destination city. He lives in the same town as Octavia (possibly even with her, for all we know). They can have sleepovers every night.

On the other hand, Sally could give up the room. It would be a nice gesture, and Octavia and her boyfriend would get full use of the privacy beyond what Sally would gain from the experience. I told Sally that it’s likely I would give up the room if I were in this scenario, but in all honesty, I would probably hold it against Octavia for asking for quite some time. I’m not even the type to hold grudges, but when I come really close to getting something awesome and then it’s taken away from me, I don’t forget it. This is true: I still remember the time a kid in my fourth-grade class grabbed a root beer dum-dum hard candy from a selection of candies in the middle of my table group before I could get to it even though he was late getting back from lunch and I could have taken it before he sat down but I didn’t because I was being polite and considerate and I figured that we would at least have some sort of a discussion at our table group to see if anyone else treasured the root beer flavor as much as I did. Instead I got purple (i.e., the flavor of disappointment).

As with any decision, there are many gray areas here, many variables. But really it comes down to a simple decision: Should Sally keep the room to herself, or should she give it to Octavia? I expect you, as unbiased third-party voters, to cast your vote for what you think Sally should do. I don’t benefit from either answer, and you don’t know Sally. Feel free to support your vote in the comments section.

This entry was posted on Monday, April 8th, 2013 at 9:43 pm and is filed under Uncategorized. You can follow any responses to this entry through the RSS 2.0 feed.

23 Responses to “You Decide: Who Gets the Room?”