I Ate a Grasshopper 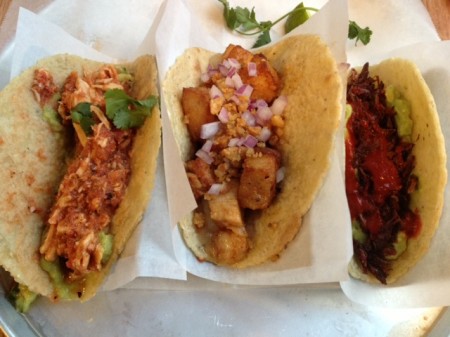 I took this before I dug in–can you guess which one is grasshopper?

Today I found myself in a brand-new Mexican-fusion restaurant in St. Louis called Gringo. I’ve heard great things about it, and I noticed that they had pork belly on the menu. They serve pork belly a lot on Top Chef, and I’ll do pretty much anything to pretend I’m on Top Chef.

So as I was scanning the menu for the pork belly taco, I noticed something else: There was a grasshopper taco on the menu.

Normally this would be the object of a few jokes that would result in me ordering the alcoholic beverage called the grasshopper, which is cool and minty and delicious and has nothing to do with the insect.

But you may recall that just two weeks ago I posted a blog entry called “Would You Eat a Cricket?” about an innovative startup that’s trying to find creative ways to serve insects as food.

So I had to eat a grasshopper taco.

Now, I have to applaud Gringo for doing as daring as this. Bold move. Really bold move.

And when I took my first bite, my first reaction was, “Hey, not bad! This tastes like food.”

Then I took a bite of pork belly. Now that tastes like food. When I returned to the grasshopper, I realized rather quickly that the taste in my mouth was not deliciousness. The best way I can describe it is this: Have you ever butterflied a shrimp and pulled out that dark vein of shrimp poop?

But I’m glad I tried it. If you live in St. Louis and go to Gringo, you should try it too. It’s certainly a unique flavor and texture. And then you get to tell everyone that you ate a grasshopper.

This entry was posted on Monday, May 6th, 2013 at 11:04 pm and is filed under food, St. Louis and tagged with St. Louis. You can follow any responses to this entry through the RSS 2.0 feed.

11 Responses to “I Ate a Grasshopper”

Leave a Reply to Joe Babbitt