Interview with a Stand-Up Comedian 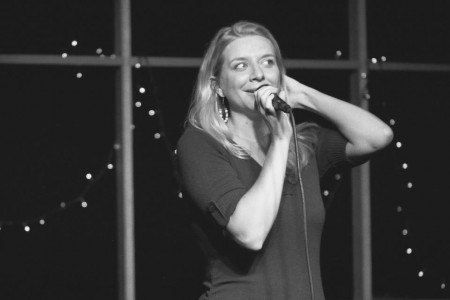 Today I have something special. A writer friend of mine I met on Twitter a few years ago, Harley May, allowed me to interview her for this post.

I should preface this by saying that there was a specific moment when I realized how funny Harley is. It was some random Twitter chat between a number of writers, and someone posed a question about what they would do if they ever ran into Harley in her hometown.

Within seconds (literally), Harley had posted a list of 20 laugh-out-loud hilarious ideas. I don’t know how to find the list at this point–it’s been a while–but they were amazing. And she came up with the list on the spot, instantly. Honestly, I don’t know if I’ve ever experienced such an outpouring of quick wit like that. I didn’t know that Harley would turn that gift into something bigger, though.

About a year ago, I discovered that Harley had taken the stage at a local bar and had performed some stand-up comedy for the first time ever. As someone who gets really nervous even thinking about public speaking, I was awestruck by Harley’s courage.

I recently had the pleasure of seeing Harley do her act for the first time. Not in person, unfortunately, but in a video. After I watched it, I asked Harley if I could interview her about the experience. This is the story of someone who actually did the thing that we all say we’re going to do but never do–and not just once, but dozens of times. I am extremely impressed with and inspired by Harley’s willingness to put herself out there in this way.

Here’s what we discussed:

Harley, thank you so much for sharing your story. I can’t wait to see what you do next. Especially if it involves cake.

This entry was posted on Thursday, May 2nd, 2013 at 12:25 am and is filed under guest entry and tagged with interview. You can follow any responses to this entry through the RSS 2.0 feed.

8 Responses to “Interview with a Stand-Up Comedian”