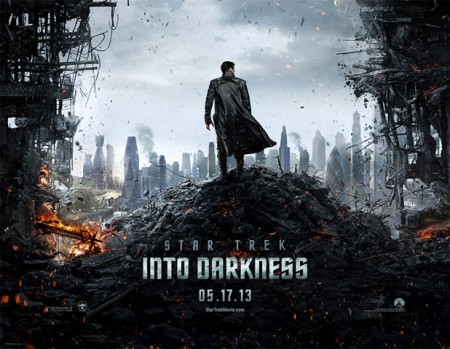 I know, I know, two movie posts in one week. Currently 90% of my brainpower is focused on Euphoria, so I haven’t been very good at thinking of blog ideas (the other 10% is about my cats). But I did see Star Trek this past weekend, so I’m going to write about it whether you like it or not. This is a spoiler-free post. Please keep comments spoiler free as well.

I’ll be honest: I thought the first Star Trek movie (the one that came out 4 years ago, the reboot) was pretty good. I certainly think it was Oscar worthy as some people were saying. It was a solid reboot that gave new life to an old franchise. That’s it. Nothing spectacular.

But Star Trek Into Darkness…wow. It’s ridiculously entertaining. It does not give you a single second to breathe. It’s a sheer thrill ride.

I don’t think I’ve ever gasped from intensity in a movie, but I came close. There are two scenes where I was literally clutching the edges of my seat.

Again, no spoilers, but the only big drawback about the movie is that it doesn’t have a lot of depth. It’s pure entertainment, nothing deeper. In fact, the one “lesson” near the end is really quite shallow. Oddly enough, the most thought-provoking part of the movie happens about 10 minutes in, and it’s largely unrelated to the rest of the movie.

But as for sheer popcorn entertainment in 3D (yes, this movie is actually really cool in 3D), do yourselves a favor and go see Star Trek Into Darkness.

This entry was posted on Wednesday, May 22nd, 2013 at 12:24 am and is filed under movies and tagged with movies. You can follow any responses to this entry through the RSS 2.0 feed.

2 Responses to “Star Trek Into Happiness”