The Office Is Closing 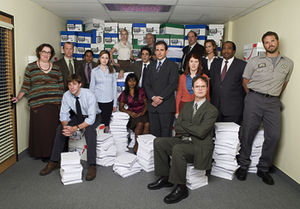 After 9 seasons, NBC’s The Office will close its doors for the final time tomorrow.

Some of you have never seen the show. Others watched the British version and didn’t like the way it translated to American English. Others may have watched until Jim and Pam got together and then stopped, while many others may have tuned out when Steve Carrell left the show. Perhaps you moved on after Season 8, during which the writers made a number of poor choices.

If you are any of those people, this blog entry isn’t for you. This one goes out to everyone who have stuck with the show until the end, laughed at least a few times every episode, and felt emotionally invested in the characters. This entry is for those who were lucky enough to make it to last week’s episode, which was easily one of the top 10 episodes of The Office ever. This is for those who await tomorrow’s final episode with hope and sadness, as it is the end.

I love the show. For all its faults, I’m there every week, rooting for Jim to prank Dwight, hoping for love to blossom in all the right places, accepting that new characters make sense in the context of an office and enjoying the journey I’ve had with those who have been with us since the beginning.

Michael Scott was a huge part of the show–he was the awkward, uncomfortable man-child manager around which the show rotated. But no one would have cared about the show if not for Jim and Pam and Dwight and all of the ancillary characters who had story lines of their own. Even characters like Creed who have absolutely no story arc gave the show some spice by being so weird.

Most of it is about Jim’s love, but a good part of it is that we get it. We love Pam too. She is not a 1-dimensional rom-com love interest whose appeal we don’t understand. With Pam, we get it. We understand why Jim loves her so much. We believe it.

To the writers and producers of The Office, thank you for 9 seasons of one of the greatest sitcoms ever to grace my TiVo. I will miss you more than you know.

Question for fellow Office fans (only answer if you don’t know the real answer): Do you think Michael Scott will appear on the finale?

This entry was posted on Wednesday, May 15th, 2013 at 11:04 pm and is filed under television and tagged with television. You can follow any responses to this entry through the RSS 2.0 feed.

10 Responses to “The Office Is Closing”