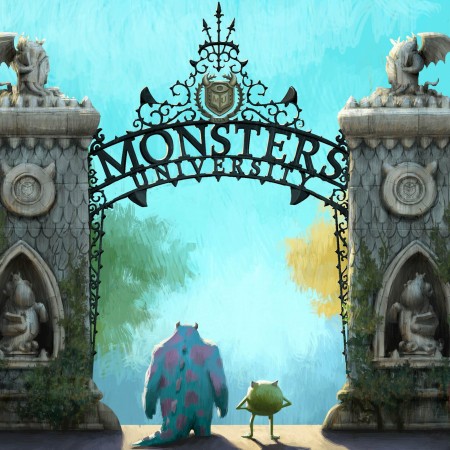 Today I saw Monsters University, which was WAY better than World War Z and not quite as good as Monsters Inc (which is probably my second favorite Pixar movie after The Incredibles). Unlike the original, it delves much deeper into how different children are afraid of different things, and sometimes those things can be very specific.

I’m curious about what you were afraid of as a child and why (if there was a reason–I think a lot of childhood fears aren’t necessarily rooted in a reason). After seeing the movie Arachnophobia when I was too young, I was quite afraid of spiders for many years, but that’s not my greatest childhood fear. (Warning: This not cute or amusing like my other “greatest fears.”)

As a child, I was quite frequently petrified that robbers had broken into the house with the intention of murdering my entire family and then me.

This fear wasn’t grounded in anything realistic. We lived in a nice suburb, and our house was never broken into. And yet the fear persisted.

Your mind can play tricks with you, and sometimes while lying in bed, my mind would convince me that I could hear the sound of feet trying not to make any sound in the carpet. I told myself that I wasn’t actually hearing anything, but a small part of me played the “what if” game: “I know there’s no one out there, but…what if there is?”

As I listened to the footsteps, I would prepare to act if anyone came into the room (or if I suspected they were about to enter the room). The options were as follows:

I think the most drastic action I ever took wasn’t at night, but rather the first time my parents left me alone at home for any length of time. I think my mom had an errand to run, and my brother and sister were out of the house. I was going to be alone for about an hour in broad daylight. I was eleven years old.

I was up in my room studying when I heard something downstairs. It sounded like clothes hangers clanging against one another. Unlike the footsteps in the carpet, I think I heard a real sound. In hindsight it was probably caused by a piece of clothing that slipped off a hanger. But at the time, my mind went right to the robber-murderer scenario.

I leaped up from my desk, ran down the stairs, ran out the nearest door, and didn’t stop running until I reached the entrance to the neighborhood. I remained there until my mom returned from the errand. Ironically, that was a far more dangerous place  for an 11-year-old to hang out for an hour. Like I’ve said, these “greatest fears” don’t make a lot of sense.

As silly as it sounds to write about this now, I must admit that the fear carries over today. I have alarms on my balcony doors so I could hear someone break in, and I’m sure my cats would let me know (or quickly shift their allegiances to the robber if he had cat treats).

I will say, though, that the one time I legitimately thought there was a robber in the house (my live-in girlfriend at the time had a hanging shoe rack that came crashing down in the middle of the night), my instinct wasn’t to run or hide or bury myself in leaves. Rather, it was to jump out of bed and shield my girlfriend from the “robber.”

After we realized the true source of the sound and my adrenaline dropped back down to normal levels, it felt good to know that (a)  my instinct was to be brave, not cowardly, and (b) I cared enough about someone to put their needs before my own. Sometimes it takes a provocation like that to realize the depth of your feelings.

What was your greatest childhood fear, why do you think you had it, and does it persist in any form today?

This entry was posted on Wednesday, June 26th, 2013 at 10:05 pm and is filed under movies, My Greatest Fear and tagged with greatest fear, movies, superlatives. You can follow any responses to this entry through the RSS 2.0 feed.