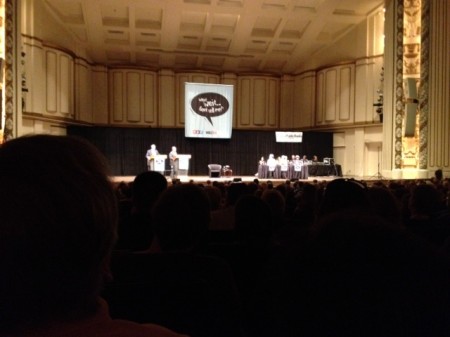 I have a bias in favor of quick-witted people: I tend to think if you’re quick-witted, you are extremely intelligent. Your brain works faster than the average brain to turn knowledge into humor.

If that theory is true, tonight I got to listen to some of the most intelligent people I’ve ever met.

I was invited to attend a taping of an NPR radio show called Wait, Wait, Don’t Tell Me. I’ve heard of the show but never listened to it–I pretty much only listen to board game-related podcasts these days. Apparently WWDTM records a live show every week in Chicago, but occasionally they travel to other cities.

Although it was clear that the show was a big deal from the sold-out crowd at Powell Hall (the same place where I saw The Matrix a few months ago), I don’t think I realized how cool the show was until the lights dimmed and the music started playing. “Wow,” I thought. “These guys are rock stars!”

In reality, they’re more like comedians. But they’re comedians in front of a very welcoming, excited crowd–I doubt there are ever any boos at a WWDTM taping. The whole show is carefully orchestrated, and it moves along at a nice clip. The 2-hour show felt much shorter.

As I mentioned, I was amazed by how quick-witted the hosts and guests were. Peter Sagal, the main host, has some prepared jokes and lines, but he also ad-libs quite a bit, and pretty much anything he said was gold. The three panel members were all quite quick-witted as well. And even the guest of honor, Jackie Joyner-Kersee, was really funny, which I think was just as much the environment and her supporting cast as it was her sense of humor.

Back when I was working on the publishing company I co-founded, we puzzled over how to make book readings more appealing. After seeing this live radio show recording, I think I have a much better idea of how it could work. Humor is key, as well as variety–don’t linger on any one topic for too long. Having an organized, coordinated program goes a long way, and having multiple people involved instead of just one reader can make for a very entertaining event.

I had a great time at Wait, Wait, Don’t Tell Me. If you ever get the chance to see them live, I highly recommend it. Although I bet listening to their show would be quite enjoyable as well. Have you ever listened to it?

This entry was posted on Friday, June 28th, 2013 at 12:28 am and is filed under humor and tagged with humor. You can follow any responses to this entry through the RSS 2.0 feed.