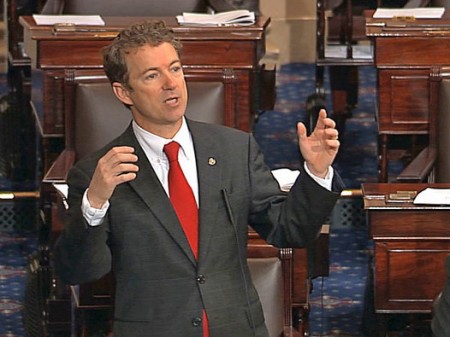 WASHINGTON, DC (AP) – With many pressing issues like the economy, sustainable energy, health care, immigration rights, gun reform, and marriage equality on the minds of millions of Americans, the US Senate has opted instead to focus on an issue that impacts hundreds of US citizens every day: Senate filibuster rules.

With his head held high and his pink Mizuno running shoes marred with dust, Senator David Marsala took a seat late Tuesday night after a record 21-hour filibuster of the filibuster debate.

“I honestly don’t know how he did it,” said opposition leader Sandy Frank. “He was a machine up there today. By talking for such a long time about nothing of consequence, he convinced me to change the views my party assigned to me long ago when I took office!”

Seemingly invigorated by the experience, Marsala vowed to promote sweeping filibuster allowances across all levels of government and society. Reporters captured an iconic moment on his commute home when Marsala filibustered a 7-11 cashier who wouldn’t let him use more than 2 cents from the “take a penny, leave a penny” tray. The filibuster lasted 15 minutes, including a 5-minute tangent involving a summer-only Slurpee flavor that Marsala insisted was a “tragedy greater than global warming.”

After its two-day summer session, the Senate will reconvene for its fall session on October 16.

This entry was posted on Wednesday, July 17th, 2013 at 12:18 am and is filed under humor, Newsflash and tagged with humor. You can follow any responses to this entry through the RSS 2.0 feed.

3 Responses to “Senator Ends Record Filibuster on the Filibuster Decision”