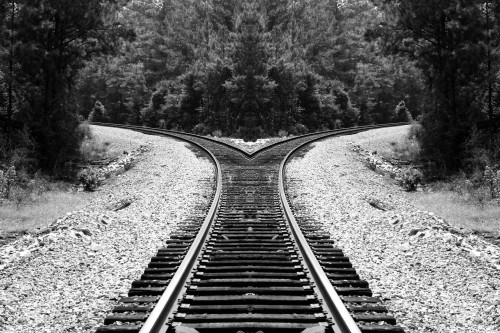 Last week on a blog entry about an online ethics and morals class at Harvard, I mentioned a scenario with a trolley car that I’d like to expand upon today with a poll. I will write about this from the perspective of an American, but you can insert your country wherever I talk about America.

In a few seconds, the trolley car will reach the divide and you will need to choose to collide with the American or the non-American. Or you can not choose either direction and let the trolley car veer one way or the other on its own. Unfortunately, the person you hit will die.

Whom do you spare? Whom should you spare? Do you have an obligation to your country to choose the non-American?

I know that sounds like a terribly callous question, and hopefully none of us will ever face that decision. I hope you also won’t assume any bias on my part for asking the question–I’m merely curious about our responsibility to our country.

In my mind, a human life is a human life. One of those men isn’t worth more or less than the other. It’s a monumental tragedy either way.

But if you live by the government’s example, each nation seems to put a greater value on its citizens than people from other countries. Perhaps that is solely the responsibility of the government, not on the citizens themselves. The armed forces will put military lives at stake to save a single American, but they may not take those same measures to save a non-American. I’m not saying that’s right, but that seems to be the precedent.

So is it your responsibility as an American citizen to choose to spare the American on the tracks? If so, why do you say that? If not, why not?

(If you’d like to think of this in a slightly less morbid sense, picture yourself as a helicopter rescue pilot. You’re flying low over a raging river and can choose to save one person: An American or a non-American. The person you don’t choose will succumb to the rapids. Whom do you spare?)

This entry was posted on Sunday, July 28th, 2013 at 10:44 pm and is filed under Uncategorized and tagged with debate. You can follow any responses to this entry through the RSS 2.0 feed.

6 Responses to “The Trolley Car Revisited: Duty to Your Country?”