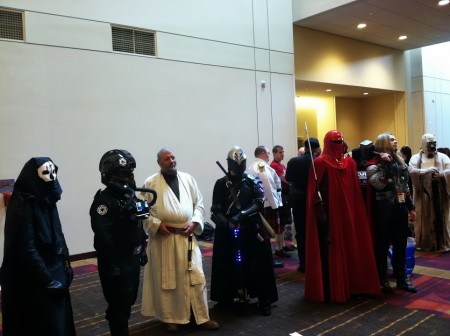 I love that Thor got into this photo. Marvel/Star Wars crossover movie?

This past weekend I experienced something unexpected at a massive gaming convention called Gen Con: I found myself among more people in costume than ever before in my life, even on Halloween.

Cosplay, as it’s called, is apparently very common at Gen Con. It might be the best people-watching event ever. You will see what Princess Leia looks like if she were a man with a potbelly. You will see Bob Ross. You will see random characters from video games you played when you were 8. And you will see a masked man on stilts who continues to haunt you in your dreams.

I’m fascinated by this whole idea of cosplay. I rarely get into Halloween as an individual, but I’ve enjoyed a good group costume from time to time. I couldn’t see myself walking around a convention in costume, though…at least, not until now. Now I’m kind of curious.

I’d really like to better understand what drives adults to dress up en masse in public at an event like Gen Con–I want to know the psychology behind it. I have a few theories:

What do you think? If you were to bring a costume to Gen Con, what would it be? I would be tempted to wear my Dharma Initiative costume from Lost. No one got it when I wore it to Halloween a few years ago, but I bet tons of people would get it at Gen Con. Plus, I rarely get to wear outfits that consist of one piece of clothing.

This entry was posted on Monday, August 19th, 2013 at 12:10 am and is filed under Uncategorized and tagged with editorial. You can follow any responses to this entry through the RSS 2.0 feed.

9 Responses to “Why Cosplay?”