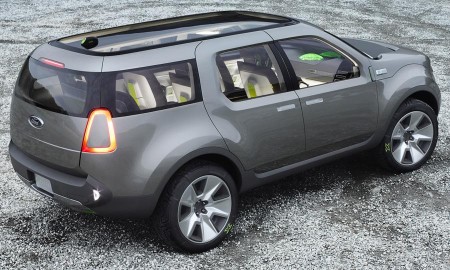 DEARBORN, MI (AP) – Following its August 2013 release of its 2014 Explorer, Ford proceeded to announce an entire line of cars dating through 2037.

“With increased competition from other companies announcing their next-year models earlier and earlier into the previous year, we determined that the best strategy for the Ford Explorer brand is to say ‘screw it’ and release everything we have,” said Angus Piddlywinks Ford VI in a keynote address to stakeholders today.

Ford was referring to Kia’s decision in January ’13 to announce its 2014 line of whatever car Kia makes, as well as Honda’s announcement of it’s 2013 Civic in September ’11.

“The Ford family of cars has thrived on ingenuity and advancement since 1901. At the time, the company only released cars for the current year, because it makes absolutely no friggin’ sense to release next year’s model this year, especially not with months to spare,” said Ford. “But that was 1901, and now it’s 2013, so we’re releasing one future car a week–every week–from now on, until we run out of models.”

Ford’s “Future” line begins this week with the 2015 Explorer, which features a bigger cabin, more legroom, and automated highway driving capabilities. Next week brings the 2016 line, already famous on Twitter for an extended retro grill that reduces mileage from 8 MPG to 10.

2020 (the first week of October) begins the “Future Future” line of flying Explorers. The series concludes with the 2029 gas-less, wheel-less model built for what Ford calls, “The post-apocalyptic hellscape our futurists are predicting for late 2028.”

Physicists are excited by the 2033 Explorer, which is an oval-shaped portal that teleports the driver into any other Explorer (power windows not included).

Ford concluded the keynote by taking the 2037 Explorer out of his pocket, ingesting it, and turning into pure energy capable of traveling through space and time at whim. “Built Ford Tough!” he concluded.

This entry was posted on Sunday, September 8th, 2013 at 9:32 pm and is filed under fake article, humor, Newsflash and tagged with humor. You can follow any responses to this entry through the RSS 2.0 feed.