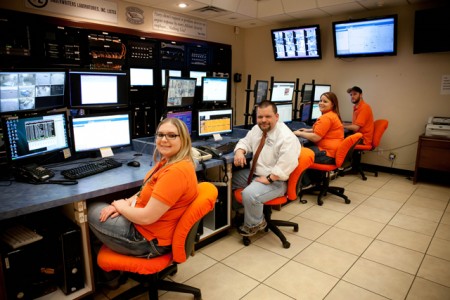 I was reminded of this experience by an article I read recently about a study involving surveillance. The study placed surveillance cameras at restaurants to see if they reduced bad behavior by employees. Obviously it did. The surprising result, though, was that employees actually worked harder. Because they weren’t able to get away with their usual shenanigans, they spent more effort trying to get customers to buy an extra drink or dessert. They sold more, they were better servers, and they made more money.

I might write a future moral dilemma about restaurants, but that isn’t what I’m hear for today. I spent one of my college summers working in the “central station” of an alarm company. You know, the kind of company that monitors your house when you’re away.

This involved sitting in a locked room with no windows for 8 hours a day while watching the computer screen for alarms. When an alarm appeared in the queue, it was our job to click on it and respond. During busy times, most everyone was responding to alarms, so there were only a few people available to grab the new alarms. I worked quickly and got a lot of alarms as a result.

If  you put yourself in a room with 5 other people at work, the chances are pretty good that one of them won’t be a hard worker. That was the case that summer.

I can’t remember her name–I’ll call her Marcy–but there was one woman who had figured out a loophole in the system. There were some alarms that were far less urgent than others. For example, a “trouble” signal indicated that there was something slightly off about an alarm system that we needed to look into before resolving the alarm. Usually they were glitches in the system that could be solved if we called the homeowner and had them reset their system.

So dear Marcy would grab a trouble signal, making it look like she was doing something on her computer screen and blocking her account from other incoming alarms. She would then proceed to call a friend and spend the next hour talking on the phone. She even had a specific tone of voice for those phone calls–a “this is really important” voice. If a supervisor walked into the room, it would look like Marcy was hard at work. I would often go through 10 or more alarms in the time that it took Marcy to finish responding to one trouble signal.

I don’t know if it’s relevant, but there’s one other thing you should know about Marcy: She was very poor. She had two kids from two different fathers, neither of whom were in the picture. When her kids had birthdays, everyone in the office chipped in to get them gifts. Working at the alarm company was actually a pretty good job for her, and losing it would have hurt her quite a bit.

Honestly, it really frustrated me that Marcy wasn’t doing her job. I had to work twice as hard because of her abuse of the system, and she was getting away with theft of the company’s time. I always feel inherently loyal to the company I work for, and I didn’t like that they were being deceived.

So as my last day approached and I prepared to go back to college, I seriously debated telling my supervisor what Marcy was doing. It wouldn’t have been hard to prove at all–the supervisor could look at the records and see how long Marcy was spending on trouble signals.

In the end, I decided not to say anything. It didn’t feel like the right decision, but I also didn’t feel like it was my place to report Marcy. I guess I could have confronted Marcy about what she was doing. I didn’t have the balls to do that, though.

What do you think? What is the morally correct thing to do? What would you have done?

This entry was posted on Wednesday, September 4th, 2013 at 12:35 am and is filed under behavioral economics and tagged with moral dilemma. You can follow any responses to this entry through the RSS 2.0 feed.

6 Responses to “Moral Dilemma #2: The Surveillance”