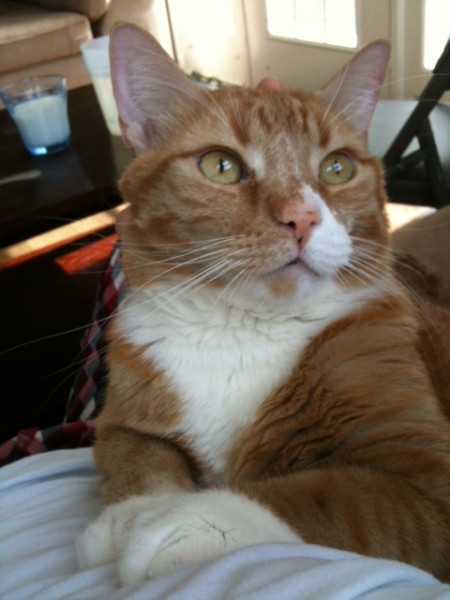 I want to be clear up front that the focus of this blog entry is to say how awesome the Humane Society of Missouri has been lately. Before I go into that too much, here is some context:

About a month ago, my eldest cat, Biddy, stopped eating. Which is pretty weird, because Biddy’s top two favorite activities are:

I won’t go into the details, but this unfortunate turn of events has led to a number of visits to the veterinarian to try to figure out what’s wrong with my little boy. For a while it was a tossup between cancer and inflammatory bowel syndrome; as of today it looks like the latter, which is wonderful. Now we just need to figure out what kind of food Biddy will eat.

As Biddy and I have gone through this (my other cat, Walter, is somewhat ambivalent), I’ve tried to look for the silver lining. I didn’t think I’d have to face Biddy’s mortality for another 7 or so years; he’s only 6 years old now. He’s an animal, but I love the little guy. I don’t want to lose him.

So a silver lining has been tough to find. But it struck me a few days ago: The Humane Society of Missouri, from where I adopted Biddy and where I take him for checkups and testing, has been absolutely incredible during this process.

In particular, Biddy’s veterinarian, Dr. Castelli, has been such a blessing. She and her assistants have been incredibly compassionate and gentle with Biddy on top of their methodical and professional approach to diagnosing and curing him.

On top of that, Dr. Castelli calls me every 2-3 days to check on Biddy. I can’t tell you how much that means when the health of your pet is on the line. It’s a level of service that I’ve never experienced with anyone else caring for Biddy’s health, much less my own!

So in the midst of Biddy’s crisis, I just wanted to give a huge shoutout to Dr. Castelli and the Humane Society f Missouri (and beyond–do most states have Humane Societies?) I wouldn’t have Biddy in the first place were it not for them, and he’s on the road to recovery thanks to them as well.

If you have a pet, do you have an organization or a person you’d like to thank for their care? Feel free to share in the comments.

10 Responses to “More Than Humane”