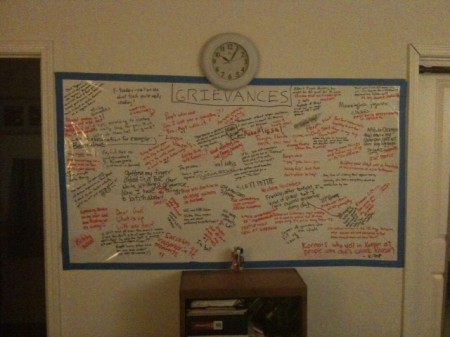 One of the Festivus grievance whiteboards from 2011. So much drunken handwriting.

For the last 10 years, I’ve hosted a Festivus party in December. For those of you who didn’t watch TV in the 90s, Festivus is a made-up holiday featured on one episode of Seinfeld. According to George Costanza, Festivus features three traditions:

So with those guidelines in mind, I created a Festivus party 10 years ago as many others have done. I’ve refined it in recent years, adding subthemes to give people some direction on how to dress. I’ve added a bartender to keep things classy. And I have giant whiteboards in several rooms for people to write their grievances.

As I said, I normally hold the party in December. But this year my condo will be full of board games in December, so I decided to bump the party up an entire month to November. Specifically, tomorrow.

I mention this to you because this is your chance to have your grievances included on the whiteboards of my condo during the party for all to read. They will be eligible for the Top 40 Festivus grievance rankings I post every year after the party. And this year, since this is the final Festivus party I will host, there will also be a top 10 list of all time.

If you want to post a grievance, you might want to skim the grievances on the above link to understand the tone of grievances that work well. They’re meant to be funny, not depressing, insulting, or offensive. And the way you word them is key.

This entry was posted on Friday, November 15th, 2013 at 12:43 am and is filed under Festivus and tagged with humor. You can follow any responses to this entry through the RSS 2.0 feed.