Pet Peeve #52: When You Learn What a Keyboard Button Does by Accidentally Pressing It 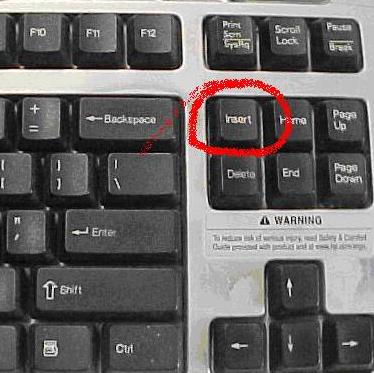 I was in sixth grade. I was working on a paper in a now-antiquated program called Microsoft Works on our first family PC. At the time I considered the program the pinnacle of technology next to a 16-bit dinosaur game that involved getting eaten by T-Rexes as often as possible.

I was hunting and pecking like a madman (I wouldn’t learn to properly type until summer school the following year), words flowing from my fingers like analogies on a blog. The paper was sure to cause my teacher to instantly promote me to eighth grade.

Then I hit the Insert button.

Of course, I didn’t know I hit the Insert button. All I knew is that whenever I tried to type something, letters disappeared instead. I couldn’t get it to stop.

Eventually I realized that I could get rid of the problem by closing the program and starting over, but by then the damage was done. I was relegated to the sixth grade, a land of puberty, sex-ed, and Hypercolor jackets.

The title of this post is a bit of a misnomer–I still have no idea what the insert button does. I bet that even keyboard company executives have no idea what it does, but they’re too afraid to say anything, so they keep putting it on keyboards.

Have you experienced anything like this on the computer, whether it’s a keyboard button or a keyboard command you accidentally activated?

This entry was posted on Monday, November 4th, 2013 at 11:18 pm and is filed under pet peeve and tagged with pet peeve. You can follow any responses to this entry through the RSS 2.0 feed.

5 Responses to “Pet Peeve #52: When You Learn What a Keyboard Button Does by Accidentally Pressing It”