Anchorman 2: The Most Brilliant Hype Machine Ever 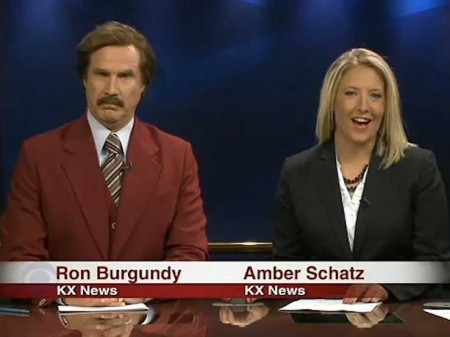 I’m in awe of the the promotional campaign for Anchorman 2. The brilliance of it exceeds anything I could have imagined for any movie, and I think it’s going to result in a monumental response at the box office.

The campaign–as far as I’m aware–started with Dodge Durango commercials. They were rare commercials that I wouldn’t fast-forward through, and then I would seek out more of them online. There are tons of them with millions of hits on YouTube.

Then I heard about a week ago that Will Ferrell appeared in character to co-anchor the local news in Bismark, North Dakota. This wasn’t a quick guest spot–he anchored the entire 30-minute program. You can watch the highlights here.

Then he appeared as as a guest on a news program called The Project in Australia. What’s best about his appearance here–as well as the other news appearances–is that the other anchors treat him like an actual person. They aren’t talking to Will Ferrell; they’re talking to Ron Burgundy.

The appearances continue (full list here), but the funniest one is his interview with Peyton Manning. The timing is a little off due to the broadcasting delay, but it still works.

Can you imagine if Will Ferrell stopped being Will Ferrell and just became Ron Burgundy all the time? I would watch the news every night if that were the case.

I’m wondering if this type of promotion would work for other movie sequels with well-known characters. Can you think of any examples?

This entry was posted on Monday, December 9th, 2013 at 12:32 am and is filed under movies and tagged with movies. You can follow any responses to this entry through the RSS 2.0 feed.