SUBJECT: Funeral Pyres: There has to be a better way

Brethren, I beg of you: For the sake of our future and our children’s future, please, please stop putting our honored dead on wooden rafts and setting them aflame.

I understand the tradition. I get it, I really do. To this day, tears come to my eyes when I think about my grandfather, Ulfr the Large, setting off on the next journey upon the waters of Lake Auor. He lived to the ripe old age of 34. 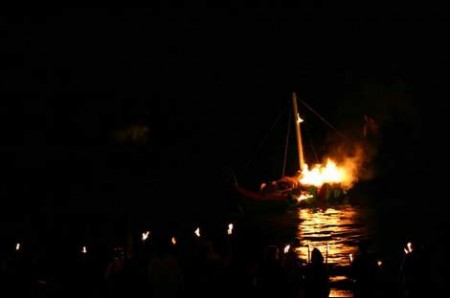 But our traditions won’t matter if we continue to burn down our village every time someone dies. I feel like our forefathers didn’t really think through the whole “funeral pyre” idea: You put a body on a raft, set it on fire, and then push it out onto the lake? Within minutes the current carries the pyre to shore, and we’ve got a forest fire on our hands.

I’m honored that you chose me to lead our elite team of firefighters. We do our best to put out the forest fires before they reach our village. But there is little we can do if we miscalculate the location of the raft. Which we do ALL THE TIME.

In fact, just last week we were all set up along the river in the south hills when the winds pushed Elder Ragnhildr’s pyre directly back into the dock. Three people died at that funeral. Of course, that accident resulted in three simultaneous funeral pyres and three separate fires.

At the last town council, I proposed that we simply not light the funeral pyres on fire. Couldn’t we honor the dead by not endangering the living? Do the dead really know if they’re on fire or not? Perhaps they don’t even want to be lit on fire? We could add this as a question on our Viking driver’s licenses next to our organ donor preference: funeral fire or no fire?

Look, I like a good funeral pyre as much as the next guy. The chanting, the arrow lit aflame and launched into the dark, the light against the horizon…it’s all very langlifis ok heilla.

But I’ll be honest: I’m tired. I can’t maintain this pace. If you haven’t checked, Vikings don’t live very long–we die A LOT. There’s a funeral almost every week, and most of them result in forest fires. I barely see my wife and kids anymore, and when I do they won’t get anywhere near me because I reek of burnt fish.

I respect your decision either way, and I appreciate your consideration.

This entry was posted on Tuesday, December 17th, 2013 at 9:56 pm and is filed under fake article, humor and tagged with humor. You can follow any responses to this entry through the RSS 2.0 feed.

12 Responses to “Memo from a Viking Firefighter About Funeral Pyres”