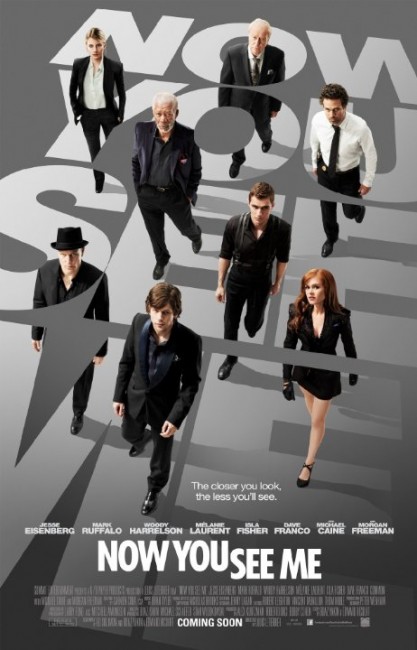 It was a another great year for movies that I saw for the first time this year, with 28 movies receiving at least the coveted Stegmaier 4 Stars (out of 5) and 11 movies receiving ratings of at least 4.5 out of 5. Below are the best of the best in no particular order.

Now You See Me: A magician heist movie? Yes please. This is a pure popcorn flick, but that’s not a bad thing. I watch movies to be entertained, and this movie definitely accomplished that goal.

Star Trek Into Darkness: The pace of this movie is brutal. Once it starts, it grabs you and doesn’t let go. I can’t wait to see what Abrams does with my space franchise of choice, Star Wars.

Ted: There were a number of hits and misses in terms of the humor in this movie, but I just love the idea and execution of this movie. Millions of people watched a movie about a drunk teddy bear. How awesome is that?!

American Hustle: This is one of the best acted movies I’ve ever seen. Period. It’s much more than just costumes and hair–it’s tiny mannerisms. It’s how Amy Adams plays a character who is pretending to have a British accent. It’s how Christian Bale responds as his character gets more and more in over his head. It’s how Bradley Cooper’s character wants so badly to be a hotshot. And Jennifer Lawrence…how is she only 23?!

Pitch Perfect: This is the funnest movie I saw this year. I don’t even mind that HBO plays it constantly–it’s the perfect movie for tuning in for 10-15 minutes. If you don’t find yourself singing along even a little bit, you’re probably a cylon.

Rush: I had low expectations going into this movie. I don’t care about car racing at all. But this movie is about much more than racing–it’s about rivalries and how we motivate ourselves. It’s a brilliant, intense film.

Warm Bodies: Yet another fresh take on a well-used genre. This is a rom com where the main love story is between a zombie boy and a human girl. It’s a very clever concept, and it’s executed in a humorous and often tense way.

Gravity: Movie of the year? Maybe. The direction is second to none. And the acting, especially given the constraints used for filming, is superb. This movie came the closest of any on this list to getting 5 stars, but I had several minor gripes that will get in the way of that rating (i.e., one too many things go wrong, and I have no desire to watch this movie again, especially on a tiny TV instead of the big screen). However, it’s truly a work of art and deserves an Academy Award.

What were some of your favorite movies of 2013? I do wish I had been able to see The Wolf of Wall Street and Her before the end of the year, but they’ll have to wait for 2014.