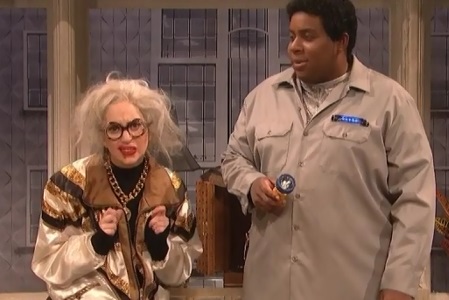 Saturday Night Live basically offers two kinds of sketches: new sketches and ongoing sketches. Lorne Michaels has built the brand based on the combination of those two. You always get something new when you watch, and you also get something familiar.

In recent years it’s my perception that there have been more ongoing sketches than new ones. That’s totally fine…if they’re good sketches. But–with all due respect to the talented SNL writing team–there are a fair number of repeat sketches that simply don’t work. Kristen Wiig was funny, but she had several ongoing sketches that were borderline unwatchable.

This season, SNL got a bunch of new cast members, and they’ve barely used them. That, too, makes sense–they need to ease them onto the scene. But these people didn’t get onto SNL without being really funny.

So it brought me a huge amount of joy a week ago when SNL actually had a few brand new sketches with new cast members. The two most memorable for me were the one with the man who moved like a baby and the one with the guy dancing in his apartment. Both were pretty random, but I thought they were hilarious.

I think a big part of that was that they were fresh and new. The ongoing sketches often rely on the familiarity of the previous sketch to be funny–they’re funny because you’re seeing the talk show host cut off his guests again. But by themselves they don’t work all that well.

If you watch SNL, do you prefer ongoing sketches or new sketches?

Also, I don’t follow Lady Gaga’s work, but she was one of the best SNL hosts I’ve ever seen. Right up there with Alec Baldwin and Peyton Manning.