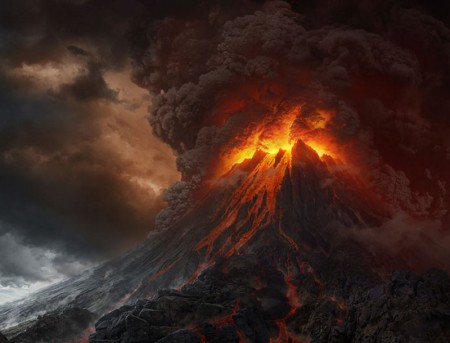 I’m no expert in mountain-naming, but it seems to me that the person or creature who chose the name “Mount Doom” had to know he was creating trouble for future generations.

Imagine yourself sitting around a council chamber among all the other cartographers of the land. You’ve been using all the different languages of Middle Earth to name things, and you finally decided to come up with a consistent nomenclature.

The elf to your left clears his throat and points to a corner of the map. “Lord Winklebottom of the Tinkletree clan would like to select a name for the large, volcanic mountain to the east.”

King Mystus, whose wife has been playing footsie with you for the last 10 minutes, sheathes his sword and proposes that the mountain be called “Volcanic Mountain.” He’s a very literal man.

“And my axe!” one of the dwarves say.

Gandalf (of course Gandalf is there) strokes his beard and says, “Volcanic though the mountain may be, a power far greater than magma will soon rise from the depths of Mordor!”

“Why so cryptic?” you say. “Can’t you just tell us what’s going to happen without all the riddles?”

Before he can answer, Gandalf jumps out of the window onto an eagle and rides away.

The elf speaks again. “Lord Wilkebottom of the Tinkle–”

“We don’t have to say your name every time, Winky” you say. “That’s why we played a getting-to-know-you game at the beginning of the meeting.”

The dwarves stomp their axes in approval.

You shake your head. “Really? Mount Doom? Is that the best we can do? If we call it something like that, we’re practically guaranteeing that’s where evil dudes are going to hang out from now on. How about Mount Pleasantridge? Or Mount Smiles? Anyone? Bueller?”

“And my axe!” a dwarf proclaims.

You stand up. “Guys, guys, think about this. Mount Doom is a terrible name. We’re literally dooming the place before it even has a chance. No one is going to build there. We need something that will attract businesses–maybe a cupcake place on the ground floor, a Quiznos, then lofts along the ridges. Think of the view! How about Mount Sunrise or Mount Cuddles? Anything but Mount Doom.”

Lord Winklebottom waves her spindly hand. “And it is so. On the third day of the fourth moon of the eighth year of the twelfth age, it will come to pass that the volcanic mountain to the east shall be known as Mount Doom.”

You grab your lunchbox and head for the door. “Don’t say I didn’t tell you so. I’m moving my people out west to start a shire in New Zealand. Us hobbits are staying as far away from Mount Doom as possibles. See ya, wouldn’t want to be ya!”

“And my axe!” you hear as the door closes. Idiots.

(end deleted scene from Lord of the Rings)

This entry was posted on Monday, December 2nd, 2013 at 12:19 am and is filed under movies and tagged with debate, movies. You can follow any responses to this entry through the RSS 2.0 feed.

7 Responses to “Was Naming the Mountain “Mount Doom” a Self-Fulfilling Prophecy?”