My Favorite Board Games of 2013

I’ll say up front that I’ve left my games, Viticulture and Euphoria, off this list due to personal bias. Although they would totally be on this list–why would I design games I don’t love to play?!

Let’s start at the bottom of the top. Games on this list are among those that I played for the first time in 2013.

10. Ticket to Ride: I didn’t play Ticket to Ride for a long time because it seemed too “simple” to be a game that would engage and intrigue me. Well, never again will I say that about a game without playing it, because some of the best games are those with only a few rules and a lot of interesting choices. Ticket to Ride is one of those games.

9. Coup: Coup is a very light, short game with bluffing as a core mechanism. Someone recently described it as Citadels meets BS, and that’s spot on. I’ve been pleasantly surprised by the depth such a small game provides, especially in terms of in-game interactions.

8. Lords of Waterdeep: I played this game for the first time at a convention back in May…and was really bored. I just felt like I was pushing cubes around. However, I’ve rediscovered the game on my iPad, and it’s brilliance really shines there. It’s a great worker placement game.

7. Boss Monster: Remember in old side-scrolling video games where you had to fight the boss at the end of the level, often in a dungeon? In this game, you ARE the monster, and you’re building the dungeon. The 8-bit art is brilliant, and I love how fun the game is.

6. Shadows Over Camelot: This was the second cooperative game I’ve ever played and the first with a traitor mechanism (all players are competing against the game, but one player might be secretly competing against everyone else), and I loved the player interactions and the theme. I always wanted to be a knight of the round table, and I felt like that in this game.

5. Libertalia: I love games that scale from 2-6 players and only take an hour to play, so this game hits my sweet spot. Each player is the captain of a pirate ship, and on each turn you’re simultaneously choosing a crew member to play. Everyone starts out with the same crew members, so a big part of the game is figuring out what other people will play and staying one step ahead of them while planning for the second and third stages of the game. This game is so, so good, and for the amount of depth it has, it’s quite easy to teach.

4. Pandemic: Hands down the best cooperative game I’ve played. If you did a scan of my brain during Pandemic, you would see how all the happy areas firing at full speed. I love the teamwork, the puzzle, the tension, the stakes…and as a cooperative game, it’s really easy to bring new players into the game.

3. Tzolk’in: The Mayan Calendar: I wish I had thought of this game. It’s worker placement with gears–the longer your workers remain on the gears, the better the benefits you receive when you pull them off. It’s a super high-quality production all around, and although it’s a bit hard to teach, I will always play this with people who know how to play.

2. Terra Mystica: Terra Mystica has been fighting with Tzolk’in for the #2 spot for quite a few months, but looking back, I’m going to have to give Terra Mystica the edge. If you walked up to me right now and asked which game I’d want to play, I would first ask how you got into my condo. And then we would play Terra Mystica. There are so many things to like about this game, but I think the element I love most is how much order of operations plays into the decision tree of the game. If you do this thing now, you can do this other thing later…but what if you do this thing later instead? You’re always looking forward and then looking back to think about how a small change in your path would result in a very different future. Absolutely brilliant game. 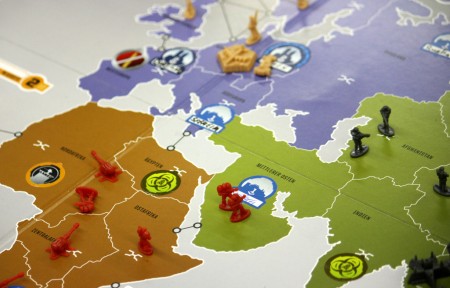 1. Risk Legacy: My best gaming experiences of 2013 were playing Risk Legacy. I’ve talked about it multiple times on this blog now, and I’ll say it again: If you’ve ever enjoyed playing Risk, you must play Risk Legacy. This isn’t a retheme of Risk. It’s a completely new type of game that starts off as basic Risk and unravels to create a whole new, considerably better game. Along the way, you permanently change the game to write your own story. I recently had the opportunity to be a guest on a video blog with the designer of Risk Legacy as the other guest, and it was incredible even to share screen time with him. It’s a brilliant game that will change the way you think about board games.

What about you? Did you play any games for the first time in 2013 that you absolutely loved?

This entry was posted on Thursday, January 2nd, 2014 at 12:45 am and is filed under favorites and tagged with board game, favorites. You can follow any responses to this entry through the RSS 2.0 feed.