Pet Please #103: When Bench Players Congratulate Starting Players Who Have No Idea Who They Are 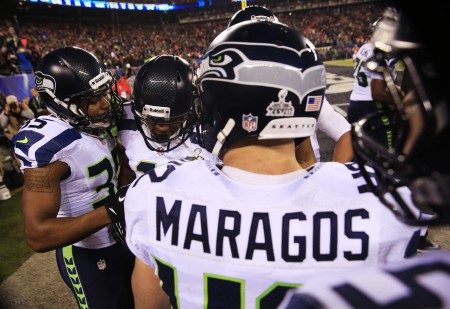 Hey, nice to meet you!

This is one of my favorite things in sports.

Tonight as the confetti streamed down upon the Seattle Seahawks, the cameras zoomed in on super-enthusiastic players in Seattle uniforms bear-hugging starters like Russell Wilson and Cliff Avril.

These are my favorite players to watch, because they’re always the most excited despite their lack of playing time, and because sometimes it’s clear that the starting players have no idea who they are. Starting players are too busy being superstars with their fellow superstars to know every guy on the practice squad.

It’s like at your high school or college graduation when you’re congratulating all the students around you, and you reach a classmate that you’re vaguely aware of (at best). But they know you somehow, and they’re just so excited to be graduating (perhaps they didn’t see it coming?) that you pretend you know them and give in to the hug/high five.

It’s the same thing in professional and college sports, but much, much better. It’s just such an awkward-yet-tender moment to witness.

Keep an eye on this the next time you watch a football or basketball game. It’s fantastic.

This entry was posted on Monday, February 3rd, 2014 at 12:48 am and is filed under pet please, sports and tagged with pet please. You can follow any responses to this entry through the RSS 2.0 feed.