A few months ago I wrote a post about a $10 pint of ice cream. It’s called Jeni’s, and it’s available at a grocery store near me. I was dating a girl this past summer who really loved ice cream, and she was fine with spending $10 on a pint. To me that seemed absurd, but I came to appreciate her ideology, especially after she bought lots of ice cream for me (she was a doctor).

Her philosophy was that if you really love something, it’s okay to spend more money on it than things you don’t love very much. Which kind of seems obvious, but I have a hard time not being frugal.

However, recently I was faced with a similar dilemma. 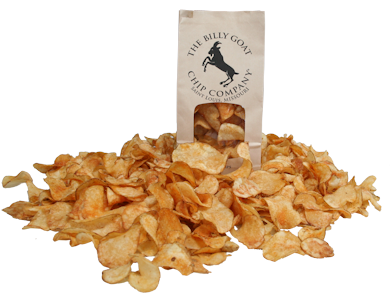 There is a brand of potato chips locally made in St. Louis called Billy Goat. They are, bar none, the best potato chips I’ve ever eaten. And they’re not as bad for you as other potato chips. They don’t have MSG, preservatives, or gluten.

The problem is, they’re expensive. I think they’re around $4 for a small bag of chips and $10 for a large bag. Granted, it’s a big bag, but you could probably get two or three bags of Doritos for the same price.

I pass the Billy Goat display at the grocery store every time I go shopping, and usually I bypass it. Too expensive. But 2 weeks ago, I was like, screw it, give me some chips. So I paid $4 for the small bag.

My oh my, I savored those chips. I only ate a few a day, so they lasted almost a week. I’ll never forget the time I spent with those chips.

A few days after I finished the bag, I found myself back at the grocery store. Like every week, I passed by the Billy Goat display, and I almost kept going.

Instead, I stopped and thought about the paths that lay ahead of me. One path presented me with a life without Billy Goat chips. It wasn’t a bad life; I still had my cats, my Kickstarter campaigns, current friends, future lovers, and websites devoted to women in yoga pants.

The other path was paved with Billy Goat chips.

I chose the second path.

The best thing is, that bag of chips has already lasted me over a week, and it’s still half full. I realized that even though I paid a pretty price for something I enjoy, I actually enjoy it more if I eat it here and there. A few chips before lunch, a few more while I’m making dinner. That’s the perfect amount for me.

This entry was posted on Sunday, March 16th, 2014 at 11:44 pm and is filed under food, St. Louis and tagged with St. Louis. You can follow any responses to this entry through the RSS 2.0 feed.