Is It Just Me, or Is Basketball Really Boring? 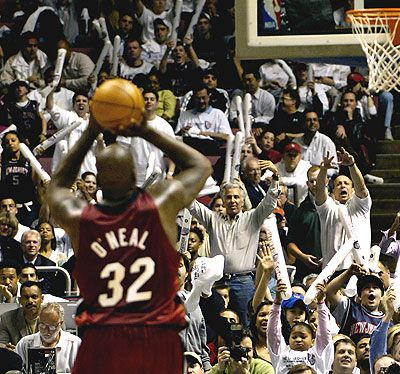 Okay, I’ll admit that watching Shaq at the free throw line was kind of entertaining.

Okay, before you jump to conclusions, hear me out:

99% of basketball makes for really great TV. It’s fast-paced, it’s a team game with one-on-one matchups, every game features a number of highlights, and the athletes are often incredibly gifted, even at the college level. Plus, the whole concept of March Madness is awesome: 68 teams competing on even ground for the chance to win it all.

I work from home now, so I technically could have watched as much March Madness as I wanted. I was way too busy to do that, but there were a few times when I thought, “Hey, let me check out what’s happening in the tournament right now.”

Every time I did this, the same thing happened: Within a few minutes of turning on the TV, I was already bored. Really bored.

The free throw in basketball is the equivalent of the extra point in football in terms of entertainment value, except that a basketball game regularly features 50+ free throws (compared to around 10 extra point attempts in a football game). There is nothing entertaining about a free throw. It completely interrupts the fluid, fast-paced nature of the game.

Here’s my completely unsolicited solution for free throws: Remove them from the game. If you get fouled on your way to the basket, treat it like goaltending: You automatically get 2 points (or 3 if you were beyond the arc). Play would stop and the other team would then inbound it as if you made the basket. Can you imagine how much more entertaining that would be?

I’m sure there are much bigger basketball fans out there who would disagree, but I’d like to hear your thoughts. Perhaps you don’t think the free throw is as boring or as interrupting to the game as I do. Either way, would you rather watch basketball the way it is now, or with my solution?

This entry was posted on Tuesday, April 8th, 2014 at 9:38 pm and is filed under sports. You can follow any responses to this entry through the RSS 2.0 feed.

6 Responses to “Is It Just Me, or Is Basketball Really Boring?”