The other day I was talking with my friend Katy, and as she was telling a story, I realized that we had stumbled upon a perfect example of a “greatest fear” like the ones I write about here. I invited her to tell the story in her own words. Thanks Katy! 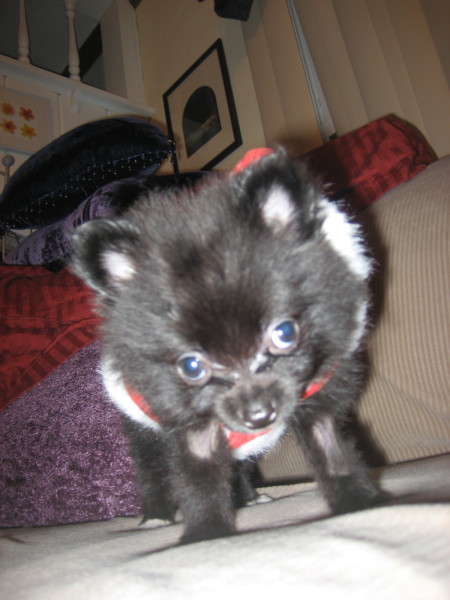 My Greatest Fear: Stepping in an Animal Accident

Roughly 6 years ago, I adopted a little puppy (Jasper) who has had a huge impact on my life, and continues to affect my decisons today.

One of the biggest challenges with having a puppy is the whole issue of potty training.

When I first met the little guy I knew he was a keeper and was prepared for all of the fun (and sometimes gross) parts of having a dog.

Adopting a puppy who was under 8 weeks old meant that he was not yet potty trained and after the first night when I realized he was not a happy camper being kept in a cage, he was moved to a hallway in my place at the time that was then barricaded with baby gates, covered in a plastic tarp, a few layers of newspapers, and finally potty training pads in the part of the floor closest to the outside door. (I’m pretty sure some of that was overkill, but I didn’t want to take any chances and mess up the floor with a doggy accident.) 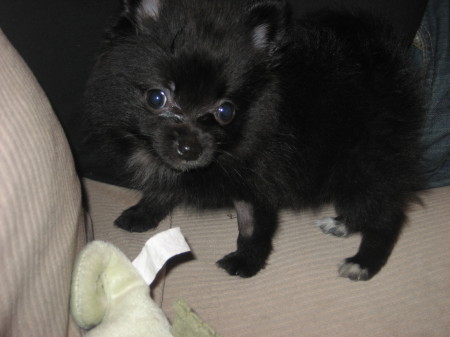 After several months of house-training, Jasper was finally given permission to have free reign of the place when there was someone home, and kept in his cage whenever no one was home and at night while I was asleep.

A few years ago I made the decision to stop making Jasper sleep in a cage at night, and he graduated to having free reign of my apartment all night.

At almost 6 years old, Jasper is fully house-trained, but since he’s little I know that accidents can (and will) happen.

My greatest fear is one day discovering the hard way that one such accident has occurred… by stepping in and then falling in a puddle left by my little fluffball.

Most of the time he is still sleeping on the bed, couch, or floor when I wake up for the day, but every now and then I’ll wake up in the middle of the night or wee hours of the morning to hear one of the most terrifying sounds— the click-clack of Jasper’s nails against my hardwood floors as he paces next to my bed. 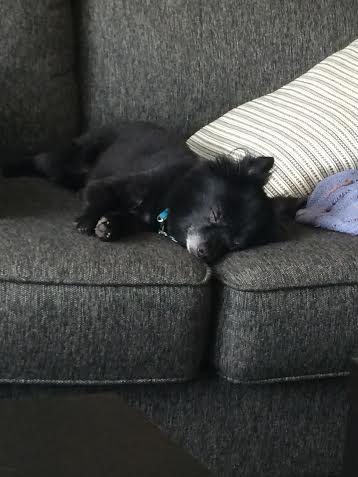 I know that his pacing can only mean one thing– time to go outside.

Even though I don’t always enjoy getting out of bed in the middle of the night, I know it’s the only thing to do to prevent a potty related accident from happening… well I could just shove him in his cage, but I don’t think he’d like that very much.

It’s been a long time since he’s had any accidents, but that fear of one day stepping out of bed and sliding to my doom in a puddle of dog pee has me on edge whenever I hear the click-clack, click-clack of Jasper’s pacing.

I know this is an irrational fear, and if it does happen one day a shower and change of clothes would quickly rectify the situation, but it still grosses me out think it might happen.

Okay, this is Jamey again. The reason I thought this was a perfect example of a greatest fear is that it’s not the pee or poop on the floor that bothers Katy–rather, it’s the slim chance that she might slip and fall as a result of the pee or poop. When Katy mentioned that to me, I said, “Has that ever happened? Have you ever slipped and fallen on a puddle of Jasper’s pee?” She replied that she hadn’t, but she was afraid that it might happen.

That, my friends, is greatest fear material. Thanks for sharing, Katy!

This entry was posted on Thursday, July 17th, 2014 at 10:56 pm and is filed under guest entry, My Greatest Fear and tagged with greatest fear. You can follow any responses to this entry through the RSS 2.0 feed.