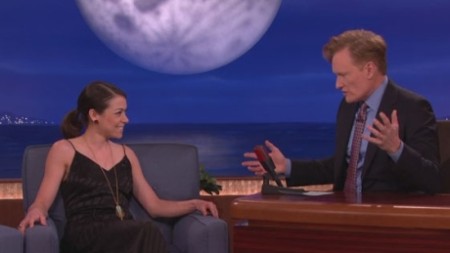 The other day I was surfing YouTube for videos of my new favorite actress, Tatiana Maslany of Orphan Black, and I stumbled upon a charming interview of her on Conan O’Brien.

You can watch the interview here; this clip in particular is 2 minutes of Tatiana Maslany talking about a book of fairy tales she read when she was younger. Here’s how it comes up in conversation:

Conan: Did you like scary stories as a kid? Because some kids, I’ve noticed, uh, my kids don’t like them at all. Some kids love it and they’re up for it right away. Where were you in the spectrum?

Conan brings it up in such a casual way that you think he’s just having a conversation about random stuff with Tatiana. That’s the skill of a talk-show host.

Tatiana launches into a charming story about a book of dark German fairy tales. At the end of the conversation, Conan mentions that they have some images from the book, and he shows them to the viewers. When that happens, it becomes clear that this wasn’t an impromptu conversation–it was something determined in advance of the interview.

Now, I get that a good talk show host (and his or her team) prepares these types of questions in advance so they don’t sit there for 20 minutes stumbling over an awkward, boring conversation. I have no problem with planned conversations.

But I LOVE when it’s clear that an anecdote or conversation is completely unplanned. It’s just something that organically came up in conversation. It’s pretty rare, but sometimes you can tell that the guest (or even the host) is completely ad-libbing it. It feels like a real conversation, and there’s a tangible sense of joy to it.

I wish I had an example offhand. I’m pretty sure I’ve seen Jon Stewart do it a number of times, especially when something goes wrong or something unexpected happens. Heck, it’s something I try to do when I’m being interviewed on a podcast–I try to ask questions to the interviewer, which they usually don’t plan for. It often results in them sharing stories that are way more interesting than what I would have talked about.

Have you ever seen this happen on a talk show?

This entry was posted on Wednesday, July 23rd, 2014 at 11:57 pm and is filed under pet please, television and tagged with pet please. You can follow any responses to this entry through the RSS 2.0 feed.