Have you ever been hanging out with someone–maybe a significant other, a good friend, or a coworker–and you knew something was wrong, but they kept denying it?

No matter how many times you ask, they won’t admit anything’s wrong. You even keep a close eye on them to see if you figure it out, but you can’t.

Then, while you’re in the next room, they defecate on the bed.

You begrudgingly clean it up after they leave the room. The thing is, they still act like nothing is wrong. They’re definitely a lot quieter than normal, you know that much. But otherwise they act like everything is fine.

Then, the next night, you’re brushing your teeth when they defecate on your bed again.

Now you’re a little mad. You’ve been trying super hard to be nice and accommodating while they try to figure out how to work through whatever it is, yet this is how they repay you. You double your efforts. You give them extra treats and cuddles, and you even leave the bedroom door open as a sign of trust.

On the third night, you hear it happening again. As you rush into the room, you know this is no mistake. This is a premeditated act. You grab paper towels and try to stop it, but it’s too late. It’s all over the bed and your hands.

Now you’re really mad. You give them a bop on the nose and sprinkle water on them before washing the sheets for a third night in the row. This has gone too far.

You talk to the vet the next day, and she says it’s likely “behavioral,” and to keep trying. Apparently cats can hold grudges when you’re gone for 2 weeks–at least, that’s my best guess. Biddy still won’t tell me exactly what’s going on.

The bedroom door stayed closed tonight, though. That’s for sure. 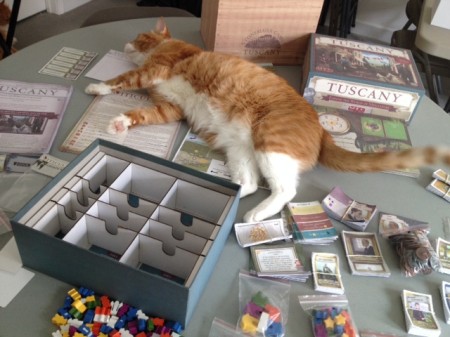 This entry was posted on Thursday, August 21st, 2014 at 10:37 pm and is filed under Uncategorized and tagged with cats, relationships. You can follow any responses to this entry through the RSS 2.0 feed.

6 Responses to “Something’s Wrong in the Bedroom”

Leave a Reply to adrienne