After only reading 14 books last year, I more than doubled that number this year (29). I’ve found that reading fiction is the best way for me to turn off my brain before I go to sleep, so I’ve gotten wrapped up in a lot of great books. Here are my 5 favorites:

5. Redshirts by John Scalzi: Scalzi is probably the best sci-fi writer in the business today. His books are a lot of fun to read, and everything about them makes sense. He still hasn’t quite achieved what he did with Old Man’s War, but each of his books come close. Oh, and Redshirts is about the crew of a spaceship that notices that certain types of their coworkers are killed on missions more than the others, and they seek to find out why this is happening before they’re killed too.

4. Endymion/Rise of Endymion by Dan Simmons: In his four-book Hyperion series, Simmons gave us one of the biggest, best epic-sci fi series ever. I’m in awe that he was able to create a cohesive story that worked so well spread out over four books. While the mysterious Shrike creature is a standout among all of his books (you learn more about it book after book), it’s the mix of technology and religion that most fascinated me in Endymion and the final book, Rise of Endymion. 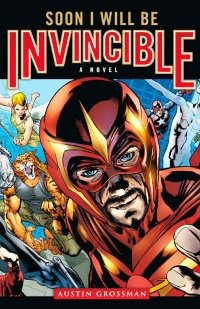 3. Soon I Will Be Invincible by Austin Grossman: This is a book about superheroes where you root for the supervillain just as much as the good guys. In fact, half of the book is written from the perspective of the supervillain. If you love The Incredibles, you’ll love this book. (Despite the cover, it’s a novel, not a comic book.)

2. The Magician’s Land by Lev Grossman (review): I’ve already sung my praises about the final book of Grossman’s series of “Harry Potter for grown-ups,” and it’s deserving of every bit of praise. It’s about real-life wizards who jump between worlds, yet it works because it’s so grounded in reality. The characters feel like 20-something people who make mistakes, think selfishly, and use their magic skills for the types of things you and I would.

1. Red Rising by Pierce Brown (review): Man this book is good. It’s been over a month since I finished it, and I still think about it. It’s the first book of a dystopian trilogy set on Mars. The first 100 pages of the book are a little hard to get through (they’re good, but Brown isn’t yet in full form), but then some things happen, and the rest of the book is epic and cinematic. It’s a rare book of this type where the main character becomes a full-fledged leader. People don’t follow him because a prophecy tells him too or because he shoots arrows better than others; rather, people follow him because of the way he leads. I can’t say more without giving it away. Just read it. It’s worth it. And the sequel comes out on January 6.

What were a few of your favorite books from 2014? Here’s my list from last year.

This entry was posted on Thursday, January 8th, 2015 at 5:02 pm and is filed under books, favorites and tagged with books, favorites. You can follow any responses to this entry through the RSS 2.0 feed.