The scores were posted on the wall of the reception area like middle school football team tryout results. With 46 questions correctly answered, Stew received the second highest score. A female Marine officer named Tadahito got 48 out of 50. Penny came in fourth with 43, and Sanchez eighth with 37. Stew went out of his way to congratulate Tadahito, who he had seen in the cafeteria eating alone over the past few weeks. She accepted his praise by saying, “I don’t know which questions I got wrong. I need to see my test.”

That evening, Stew was summoned to appear in Conference Room 2C. He wasn’t surprised to find that only a few other recruits were in the room. “Cut out the fat, eh?” he said to no one in particular. He glanced at Penny. “You sticking around for this?”

“Whatever gets me back to my bird the quickest,” he said.

When the older woman entered and closed the door, Stew counted four other officers in the room. He recognized their names from the top of the list—Tadahito, Moreno, Penny, McIntosh, and himself.

“Gentleman,” the woman said, sending a glance in Tadahito’s direction as if daring her to correct the greeting. “You’re the best of the best, all that shit. Get over yourselves. You’re in this room because you can help this nation. Maybe even this world.”

“Sacrifices,” she said, pacing in front of them. “There are three. If you don’t have the balls, now’s the time to speak up. One, you are never to speak of this operation to anyone. Two, after your time here, you will be sent to live somewhere far, far away from here. And three, you are never to return to active duty. Questions?”

Penny raised his hand. “I don’t have a problem with the first two. But active duty? How can I protect my country if I can’t fly my plane?”

The woman placed her palms on the conference table and leered toward him. “First, it’s the government’s plane, not yours. Second, you’ll be doing the work of 30 planes if you’re successful in completing your mission here.”

“How long we gonna spend in some God-foresaken country?” asked Moreno.

“France isn’t that bad,” the woman said. “They have God too.” Stew realized she was joking, but no one laughed.

Parker straightened. “By all accounts, you’re probably looking at somewhere between 10 and 20 years.”

“Whatever the hell you please. Staying alive.”

Stew stood up. He wasn’t about to sign away 20 years of his life to the CIA. “Well, that does it for me. I got too many other things to do, too much action.” He saluted the woman, shook Penny’s hand, and walked out.

Back in his room, he packed his duffel bag. He threw it over his shoulder and strode down the corridor to the exit. He threw open the door and gulped the fresh air. For 3 weeks he had been breathing circulated air inside the building. He forget how good wind tasted.

He waved down a shuttle and was walking towards it when he heard a shout behind him. “Stew! Wait!”

A young woman ran toward him, her high heals clattering on the sidewalk. She wore a pencil skirt and a button-down jacket. He glimpsed a small pink ribbon holding her hair in a tight ponytail. 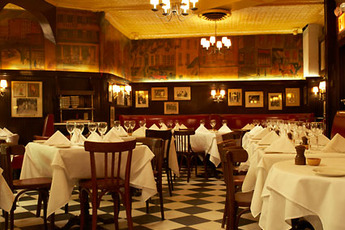 Theresa stopped a few feet from Stew. Her face was flushed as red as it was that first day they skipped school. The sight of her sent a tingle up Stew’s spine.

“I work here. You—I knew you were here, but they wouldn’t let me contact you.”

Stew nodded. “Until I decided to leave.”

She shook her head. Her face was older, her features more defined than they were in high school, but she was still beautiful. “Even then. They don’t know I’m out here.” She glanced at the building, which had several cameras tucked under the roof. “Well, now they do.”

“Are you trying to convince me to stay?”

She winked at him. “I already did.”

They had dinner that night at a little French restaurant just across the Maryland border. They sat caddy-corner to one another like lovers, not old friends. Theresa ordered in French, nudging Stew and whispering, “A little something I picked up by studying for real.”

She was a research psychologist working for the government. She specialized in profiling dictators of unstable governments, trying to predict when they’d make dangerous decisions and level of destruction they would result in. Her research group used historical models to compare past and present behavior of the dictators. The group’s estimates were accurate about 65% of the time.

“Then I got to thinking,” she said, swirling her merlot in one hand, “what if I could talk to someone in the future? Five, ten years down the road. Ask him about all the bad stuff that happens in the world between now and then so the American government can ready itself. Although the “evil dictator” profile is easy to adapt, after a while you realize that “evil” really depends on the perspective. I was more interested in things that are objectively bad, like natural disasters. If we can prepare humanitarian aid far in advance of a huge disaster, we can save as many people as possible.”

Theresa recounted her conversation with Stew back in high school. She had never been able to replicate the results of his study habits on her own, probably because she didn’t fall into Bem’s prototypical group of extroverted novelty seekers. But she got a grant to confirm his hypothesis on college students at the University of Maryland, and the results were the same. Certain students scored better on tests by studying afterwards, not before.

Theresa devised a plan and presented it to a military think tank in Washington. She proposed that she would recruit active members of the military who fit Bem’s profile, and they would train their minds to recognize messages that they’d be given deep into the future. “Well, at first it was ‘messages,’ plural. Then we decided to reduce it to one. The risk of recruits confusing similar messages was too high.”

“One message. Something like, ‘Earthquake in Los Angeles, early August 2023,’ but in code. You’d be given the message as soon after the actual disaster as possible.”

Stew shifted in his seat and took a swig of beer. “So you’re going to ship me off to some country—hopefully somewhere they speak English—and I’ll blend in, assimilate. Get some mind-numbing job I can sleepwalk through because heaven forbid I memorize someone’s order at a restaurant and that’s the message I gave to the government by mistake.”

He smiled. “Right. And then we invade Turkey for nothing, and it’s all my fault.”

She placed a hand on his knee. “It’ll work out. You could save thousands of lives.”

“I could also have a really boring life.”

She drew her hand higher on his thigh. “Let’s make it interesting, then.”

Back at Theresa’s apartment, Stew undressed and lay on top of the covers as he waited for her to change. Theresa had left the lights on so he could see her. She stepped out of the closet wearing her old gym shorts and shirt, both bursting to the seams on her fully developed body.

“They still fit?” she asked, thumbing the waistband.

This entry was posted on Wednesday, February 18th, 2015 at 10:07 pm and is filed under Uncategorized and tagged with Hindsight, writing. You can follow any responses to this entry through the RSS 2.0 feed.

One Response to “Hindsight: Part 5”