My Top 10 Favorite Tabletop Games (as of Today)

It’s been too long since I updated this list (here’s the previous version)–so long, in fact, that there are a few games on my old list I no longer like! Shows how fickle I am.

I’ve excluded the games I’ve designed and/or published from this list. This list is geared towards the games I would be most excited to play right now.

Honorable Mention: Risk Legacy. I’m putting this on the list because it still ranks at the top of the best and most memorable gaming experiences I’ve ever had and the game that has hugely influenced me as a designer. However, I’ve played it through, and I don’t think it would be the same if I were to bring it back to the table. I look forward to upcoming legacy games Seafall and Gloomhaven.

10. Blokus: This is my favorite abstract game. It’s so simple that it only has one rule: Place your tetris-like pieces so they touch corners but not edges. I love how quick it is to play and that every game feels different despite the simplicity of the pieces.

9. Ticket to Ride: When I was looking over my game shelves, this one surprised me. I genuinely like Ticket to Ride, and I’m happy whenever it hits the table. It’s a simple game, but I like all the small rewards throughout the game and the precise amount of tension (not too much, not too little).

8. Splendor: Similar to Ticket to Ride, Splendor is one of my favorite gateway games with just the right amount of tension. It also has the added element of engine building–one of my favorite concepts in games is that you get better and more efficient during the game as you build your engine.

7. 7 Wonders: This has all the things I love about games (simple rules, mild interaction, engine building, lots of interesting choices without being overwhelming, etc), plus it feels fresh every time I play due to the drafting element. Brilliant game.

5. Kemet: Kemet remains my favorite Amerithrash game, probably because it has strong Euro elements (the tech tree, while overwhelming for new players, is awesome) and because you never feel bad about attacking other players. It’s just part of the game, so you move on from each battle excited about the next one.

4. Castles of Mad King Ludwig: This is one of the games that I’ve found myself returning to more and more. Every game feels completely different than the last because of the crazy combinations of rooms that are randomly revealed and priced by the current master builder. It’s one of those games where everything you do feels good–you’re always moving forward, building up, getting better.

3. Telestrations: At a recent game night following several hours of heavy, serious games, someone said, “Can we laugh for a while?” Translation: Can we play Telestrations? I love this social game, largely because no person is ever in the spotlight. It’s essentially a social party game for introverts–perfect for me.

2. Tzolk’in: This could easily be #1. Tzolk’in, the worker-placement game with gears, makes my brain happy. Every decision is interesting (but not agonizing), there’s so much variety in the timing, there are short-term goals and long-term goals, and there are lots of different ways to upgrade. It’s hands-down one of the best Euro games I’ve ever played.

1. Terra Mystica: I think Terra Mystica beats out Tzolk’in because you don’t have to feed your workers in Terra Mystica. Other than that they’re very different games, but both have strong Euro elements. My favorite thing about Terra Mystica–other than the variety of factions–is the order of operations on the player mats and the upgrade ovals. I love that the simplest decision can lead you down a path you’ve never tried before, even with the same faction. I could play this game over and over. 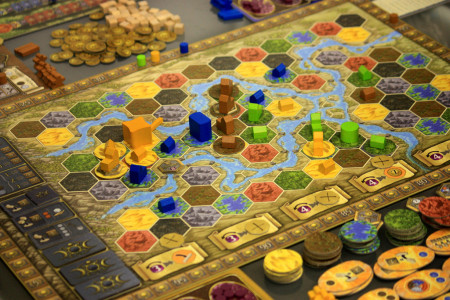 Which games on this list are also on your top 10?

This entry was posted on Wednesday, April 15th, 2015 at 11:57 pm and is filed under favorites and tagged with board game, favorites. You can follow any responses to this entry through the RSS 2.0 feed.